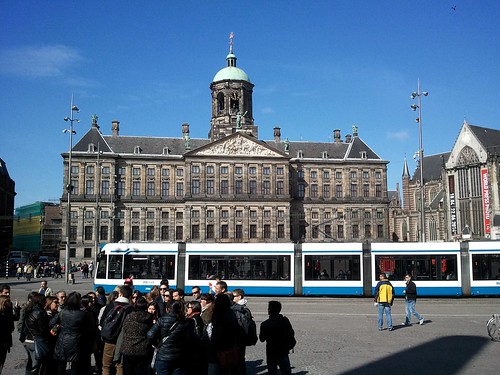 When I went to Edinburgh, we took a Sandeman’s walking tour of the city. These tours are given by freelance guides who hire Sandeman’s to promote them; they are “pay what you want” tours, where one pays the guide at the end within their means and according to their satisfaction with the tour. In return, one spends about three hours tromping through the city, stopping at various locations for the guide to relate interesting stories and historical anecdotes.

Our Amsterdam guide was a woman named Berber, clad against the elements in a felt hat festooned in scarves. She was eager to point out that, of the three English-language tour guides that morning, she was the only native Amsterdammer, so we would be getting quite the inside story. We began the tour in Dam Square, and from there we went through the Red Light District. Berber described the links between Amsterdam’s prostitution trade and its role as a major shipping port. As we stood outside a church in the middle of the Red Light District, she explained the tenuous relationship between city, Church, and sailors and prostitutes. She mentioned the sale of indulgences, and how this led to the Netherlands becoming a Protestant nation but secretly tolerating Catholicism because it was good for business. This propensity for Amsterdam to “turn a blind eye” (a phrase she was fond of using) and practise tolerance was a major theme of the tour.

We went all through the old quarter of the city. On the canals, Berber explained why the houses were so narrow and why they have hooks and pulleys at the top. With frontage along the canal a precious commodity, property taxes were charged according to the width of one’s house. Since the houses were so narrow, manouevring furniture and other large objects up the stairs could be perilous—hence, they are instead hoisted to the top floor via the pulleys. We even saw the “smallest house in Amsterdam” in terms of its width (though I’m given to understand there are a few claimants to the title). 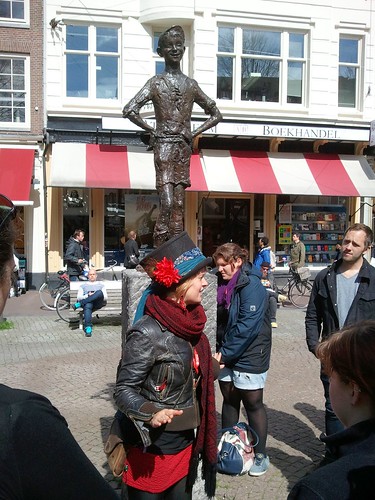 Berber continued to mix history with her geography as we visited other locations. She took us into the courtyard within the old headquarters of the Dutch East India Company; the building is now used by the University of Amsterdam. From the steps outside a door into the building, she explained the impact that the Dutch East India Company had on both Amsterdam and the wider world. From this introduction to capitalism, we walked a little further to a square with a statue of a small boy. It was a gift from tobacco companies, but in the 1960s it became a symbol around which Amsterdammers protested against plans to modernize the city centre for more automotive traffic. They were successful, and today, Amsterdam’s city centre is far better suited for pedestrians and, of course, bikes.

We walked past the old Jewish quarter, largely torn down and reconstructed now, as well as the Anne Frank House (I talked about our visit there in yesterday’s post). All in all, this walking tour was just as interesting and informative as the one I experienced in Edinburgh. It was a great way to see the city and learn things about Amsterdam’s history that I might otherwise never have known.

When the tour concluded, it was nearly 3 pm. We were starving, so we found a French-styled restaurant. I ordered beef croquettes, among other things, to give them a try. They were interesting: ground meat and spices breaded and then deep fried. I’d eat them again.

After lunch, we weren’t sure what to do next. This was our last afternoon in Amsterdam, and a beautiful afternoon it was: sunny and not too cold, with no threat of the rain that had marred the previous day. Eventually, Candice decided to return to the hostel; Jill and Tristan wanted to continue walking around the city for a bit. I was tired, and I was rather exhausted from being around people for so long … but I knew that, if I ever returned to Amsterdam, it would not be for a long time. This was my last chance to see or do anything. So I stayed with Jill and Tristan for a while, and we continued to walk around. We bought a few more souvenirs and sat in the Dam Square, just soaking up the atmosphere.

Finally, it was time for dinner. I’m a little embarrassed to admit that we dined at yet another Irish pub! So much for sampling more of the local cuisine. Nevertheless, the food was good, and I was starting to feel better after my bout with this malady for two days. From the pub we went back to the hostel for an early night, since we would have to leave by 6:30 the next morning to catch our bus back to the airport.

When all was said and done, our time in Amsterdam was short but sweet. We didn’t cross everything off our list—I missed the Van Gogh museum, and we didn’t make it to the zoo. But I thoroughly enjoyed the things we did while in the city, and I’m glad I went on the trip. I am equally happy to be “back in the Shire”, and I’m enjoying this week of rest before returning to work. 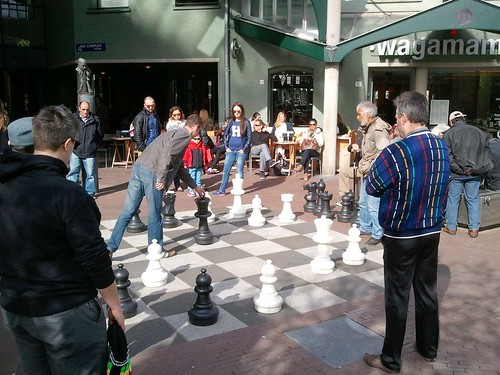 Oh, did I mention that in Amsterdam, people play giant chess?

I don’t like travelling. I’m not like Frodo Baggins; I’m perfectly happy to stay in the Shire. It’s nice there. I don’t relish the interruptions to routine that travelling brings, the fiddly bits required in packing, the problem of hygiene on the road. So I travel sparingly. Instead I live…

It has been ages since I blogged. There’s plenty I could talk about: TV shows that I have enjoyed lately, the Ontario provincial election and voting by special ballot, my impending return home … and I may indeed get around to blogging about these. For now, though, let’s talk about …