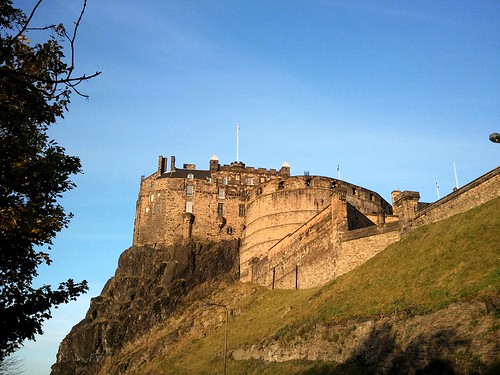 This past week was half-term, a welcome break for students and teachers alike. I elected to join a large group of fellow teachers (all of us Canadian except for an odd Aussie out) in a visit to Edinburgh, Scotland for the first four days. We all sort of filtered into Edinburgh Friday night/Saturday morning. I took the same train as another teacher; we went to Peterborough directly from Thetford, and then boarded our train to Edinburgh. The train was so crowded that I had to stand for the first hour! As we got further north, however, seats opened up as people left at the stops along the way. By the time we reached Edinburgh—four hours later—we virtually had the coach to ourselves. I discovered I could charge my phone at my seat … fifteen minutes before we reached Edinburgh station.

We stayed in a different hostel from the one we would stay during the rest of our trip, owing to the way we had scheduled things. I can’t complain about the service at this hostel—there was someone sleeping in the bed I was assigned, and I was reluctant to let him be and take a different bed lest I take someone else’s bed in the same way. Fortunately the staff were quick to sort the situation so I could get to sleep. The bathrooms could have been a bit cleaner though…. 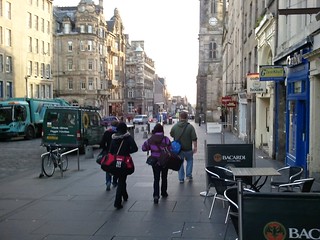 On Saturday morning, we relocated to the other hostel and met up with the rest of the group. All told, five of us had arrived Friday night; the rest had come in on Saturday morning after a long overnight in York. Fortunately, the other hostel had a nice bar and a filling (if not very appetizing) breakfast. We stowed our luggage and then waited for a walking tour of Edinburgh. 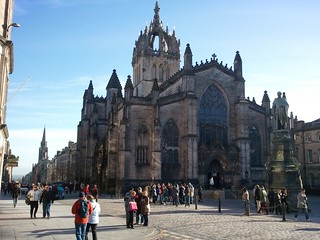 Both of our hostels were located in relatively the same area, and it was this part of Edinburgh in which we spent most of our trip. We were in the Old Town, based along the high street and the Royal Mile, which is a section of street extending from Edinburgh Castle to Holyrood Palace. This part of Edinburgh is just amazing. The architecture has been preserved even as the shops and pubs have modernized. The streets and walks are cobblestone, and despite the crazy Scottish drivers, it is easy to be a pedestrian. Along the Royal Mile there are churches and statues, not to mention a castle at one end and a palace at the other! It’s a beautiful town.

The tour was every bit as comprehensive and interesting as could be expected. There were about twenty of us in the group, and our guide took us to various points of interest in the old town. He was very knowledgeable about the city and delivered his patter in a smooth and practised way at each stop on the tour. We learned about the Scottish Parliament and the Act of Union that brought Scotland and England together. We saw the headstone dedicated to Greyfriars Bobby and the street where Burke and Hare stalked their victims. We stopped at the café where J. K. Rowling began writing Harry Potter. The tour was a great way to spend our first day in Edinburgh. Aside from the weather being bitterly cold, it was a lovely, clear day, and we became more familiar with the layout of the city and possible destinations for the rest of our visit.

The tour finished around 2 pm. Our guide then took us to a pub he recommended for lunch. I tried haggis, because it is an infamous dish outside of Scotland, and I wanted to sample it as much as possible while I was there. Everything I had heard about haggis made it out to be a disgusting dish: offal, boiled inside a sheep’s stomach! But it tasted fine. In fact, it tasted great. It tasted like any other ground meat dish I’ve had, not nearly as exotic as I expected, and frankly, I was rather disappointed! I made sure to try haggis several more times throughout my trip, at different locations, but each experience merely affirmed this impression: haggis tastes great. Try it.

That evening we went to a concert: Tallest Man on Earth. Some of the other teachers were fans of him and had bought tickets, and while I generally don’t go to concerts, I said I’d come along to this one. It was pretty good. While I’m not going to rush out to buy Tallest Man’s album, listening to him live was fine, and I could tell that the others had fun. I’m just not a fan of the concert atmosphere—noise and crowds and low light levels that make reading difficult. If I’m going to listen to music, then I’ll do it in the comfort of my own home, where I can crank the volume up or down as I please! Also, get off my lawn. (That being said, it was kind of tragic that Amanda Palmer was playing Glasgow the night before we arrived in Scotland. Ships. Past.)

We were somewhat drained after that long day of walking around Edinburgh and going to a concert, so most of us didn’t get up to any additional shenanigans that night. While a few stayed out to try some of the pubs, most of us, including me, went back to the hostel and crashed. It was a long but full day in Edinburgh—indicative of what the next few days had in store for us.

Time for a break. How about Scotland?

Being sick really throws off my routine. And I love my routine. I had planned to write one or two more posts about my Scotland trip. But I’m behind, because since last Thursday I have been ill with some kind of chest cold that has since metamorphosed into a head…