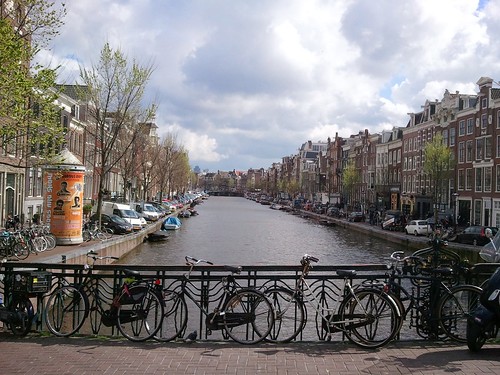 I don’t like travelling. I’m not like Frodo Baggins; I’m perfectly happy to stay in the Shire. It’s nice there. I don’t relish the interruptions to routine that travelling brings, the fiddly bits required in packing, the problem of hygiene on the road. So I travel sparingly. Instead I live vicariously through others: through the stories of friends and the writing of well-travelled people. But I must admit that, once in a while, it does one good to travel.

This trip to Amsterdam was only for two days, which is probably the perfect length for me. It allowed us to do plenty of things, but I was also home soon enough that I didn’t feel too worn out. Still, two days meant that we had to use our time wisely. There are a lot of activities and venues competing for tourists’ eyeballs (and money) in Amsterdam; we needed to come up with a plan.

I should mention at this point that, if there is one thing that dominates my memory of Amsterdam, it is … bikes. Amsterdam is full of bicycles. There are bicycle lanes on practically every street, not that they are always easy to distinguish from the sidewalk. Crossing a street can be an interesting experience, as it requires one to flit from barrier to barrier across bike lanes, tram lanes, car lanes, and then all over again after one crosses the median. If you’re unlucky enough to stray into the path of a cyclist, they do not stop. They ring their bells, but they do not stop: your life is in your own hands. Walking throughout the city, I cannot fathom the number of bicycles we saw parked on bridges, outside cafés and shops, and along canals. Sometimes they were three rows deep. Amsterdam is truly a city for cyclists, at least in the central, touristy part that we visited.

Tuesday was a “meh” kind of day. The sky sporadically sent spurts of rain down on us, with no real rhyme or reason. After an unsatisfying but complimentary breakfast at the hostel, we tried a pancake place (it also wasn’t great) and made our plans. The inclement weather favoured some indoor attractions, at least at first. So we headed for the Rijksmuseum, conveniently located very near to our hostel. 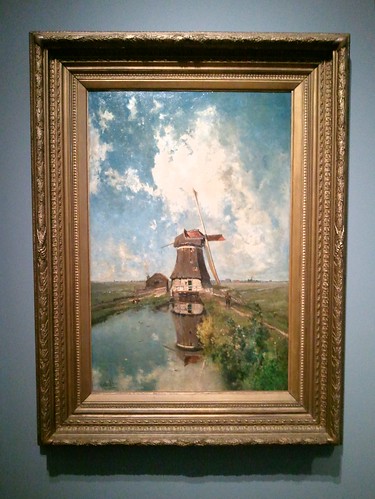 The Rijksmuseum is the gallery to end all galleries when it comes to national art, culture, and heritage. It is a massive edifice. Once inside, one has the impression that it can go on forever, that its collections and gallery spaces are boundless. Also, we were allowed to take photos. I didn’t take too many—I’m not sure I see the point of obsessively photographing within a gallery—and most of those that I took are unremarkable or didn’t turn out great in the low lighting.

We visited most of the exhibitions. Our chosen path took us first through the late 19th century. According to the text on the wall and labels that accompany the pieces, the latter half of the 19th century was a time for optimism and innovation. A lot of artists, particularly painters, experimented as new techniques were becoming available—photography, in particular, offered many interesting applications beyond simply taking photos: it was also useful in the creation of realistic portraits or landscapes. There were a few works of Van Gogh’s there as well, but Amsterdam has its very own Van Gogh museum—which, much to my regret, we didn’t end up visiting (we were just so tired).

From the 19th century we moved back in time. The Rijksmuseum does a good job placing the art in its context. These exhibits recalled many things about Dutch history that I knew but had buried deep within the recesses of memory; they educated me about many things that I didn’t know. They reminded me of the Netherlands’ extensive colonization efforts in the 17th and 18th centuries. We learn about Dutch colonialism in high school in Canada, but it is a footnote within the broader story of the English and French conflicts over North America. The Dutch came, established New Amsterdam, and left; that is the extent of their involvement in our narrative. In reality, the Netherlands were a formidable trading nation. They were the only Western nation with direct access to Japan. And, of course, the Dutch East India and Dutch West India companies were some of the first publicly-traded corporations and the inspiration for Britain’s own marriage of imperial and capitalist expansion.

All of these aspects of Dutch history are reflected in the art from the period. The gallery contains fantastic wall-height portraits of Dutch colonial officials and Polynesian and West Indian indigenous peoples. Some paintings perpetuate the myths of noble savages surrendering to the superior Westerners. Others portray the assimilation of such cultures into Dutch life. There was a model of the artificial island, Dejima, in Nagasaki Bay from which the Dutch conducted trade with Japan. And there were some truly interesting artifacts from that time period: mirrors, basins, sets of plates, etc., that provide a valuable glimpse into the ways in which people of that time might conduct their routine rituals.

There was also a fair bit of artwork from the Napoleonic era, which arguably served as the crucible from which the modern Netherlands emerged. This exhibition features massive portraits of the rich and powerful and opulent, extravagant sets of dinnerware, jewelry, and furniture. All was inspired by the Napoleons who swept through Europe in the early 19th century, reshaping and redefining borders as they did so. In the recoil from the chaos of the French revolution, there is a retreat back to the comfort of pomp and circumstance associated with monarchy and empire.

We skipped the 17th century Dutch Golden Age, the Rembrandts and Vermeers. This exhibition was housed primarily within a older section of the building; whereas most of the other galleries are very modern setups, this one was in a great hall with a high ceiling and impressive stained-glass windows. It was also, by far, the busiest part of the Rijksmuseum. By this time in our visit, we were very tired; I find I get “burnt out” after a while in a museum or gallery. So we quickly passed through but didn’t spend too much time with these very popular paintings.

I was very interested in viewing the more medieval and pre-Renaissance art, since it tends not receive so much publicity. Most of it is religious in nature, a testament to the power and presence of the Church in life in that era. It also provides a contrast to later periods owing to the lack of perspective and depth. As Margaret Wertheim argues in The Pearly Gates of Cyberspace, the flat, two-dimensional representations of medieval art are intrinsically linked to our conceptions of space and being. I was eager to see this transition.

Our last stop took us to the more modern products of Dutch art and culture. This includes photography and early film from the war eras, as well as more bizarre, minimalist pieces influenced by cubism and other up-and-coming schools of 20th-century art. To be honest, by this point I was too tired to take much in, but I’m sure that if more recent art history is your thing, this would prove a fascinating experience too.

Overall, the Rijksmuseum was an amazing place to visit. It provided perspective on Dutch history that helped to ground us as we visited an unmistakably modernized Amsterdam.

After lunch we decided to go to the Anne Frank House. We had been warned beforehand that the line to enter the house can get very long. We were fortunate: we only waited about forty minutes before gaining entry. However, in that time, the weather went from dull and overcast to rain to hail. Jill and I were snug in our jackets with hoods; Tristan and Candice were not wearing jackets. Fortunately for them, people from the museum came out and distributed umbrellas to everyone in line. I suspect they’ve done this before.

The Anne Frank House was every bit the sobering experience it should be, albeit perhaps not in the way one might expect. One goes through the entire place in a very specific and guided order. Most of the house has been emptied. Rather than furnishing the rooms in which they lived as they were at the time, Otto Frank (Anne’s father and the sole survivor after they were sent to the concentration camps) requested that the rooms remain empty. He appreciated the symbolism of this. To compensate, there is a model of what the living areas of the house would have looked like, along with some photographs of recreations. Throughout the house, there are quotations from Anne Frank’s famous diary; there are also video interviews with important people connected to the house, such as one of the helpers who brought food, and a childhood friend of Anne’s who ended up in the same concentration camp as she did.

The final room contains Anne’s diaries and foolscap on which she wrote out fair copies after deciding she wanted to transform her diary into a novel. This provided an interesting context to the phenonmenon that doesn’t always accompany the story of Anne Frank: at the time, the Dutch government-in-exile called on citizens to preserve their writings about what was happening in the German-occupied Netherlands. Anne heard these calls on radio, and it inspired her to become a writer. And thus her father, upon returning to the house following his liberation, found her diary and learned all about this hidden side to Anne.

We spend a lot of time in history class learning about World War II. More than any other event in 20th-century history, it dominates the consciousness and conscience of our society. We intersperse grim overviews and timelines of events and dates with the intense, personal stories like those of Anne Frank. And both are necessary for us to grasp the magnitude and enormity of WWII. Standing in the Anne Frank House, viewing those pages of her diary and the photographs of the people who once hid there, who lived there, never venturing outside for years … I came a little closer to understanding what it might have been like under the German occupation. But nothing in my life has (and likely, I hope, ever will) compare to such an ordeal.

After the Anne Frank House, we contemplated dinner. We opted to visit, of all things, an Irish sports pub. In Amsterdam. The food was good though, and I think we were all in the mood for the hearty, filling kind of meals we have come to expect from pubs after living in England. Following dinner, we wandered around the city a bit longer. We walked through the notorious red light district—it’s really quite underwhelming compared to the ideas one might conjure from descriptions and rumour—and visited a few touristy, souvenir stores for postcards and gifts and whatnot. Finally, we ended up back at the hostel. It was getting late, and we wanted to be up early in the morning to catch a walking tour.

Our first day in Amsterdam was dominated by visits to two very different museums. Day two would bolster this historical tourism through an informative walking tour, followed by more independent wandering throughout the city. But that’s another blog post.