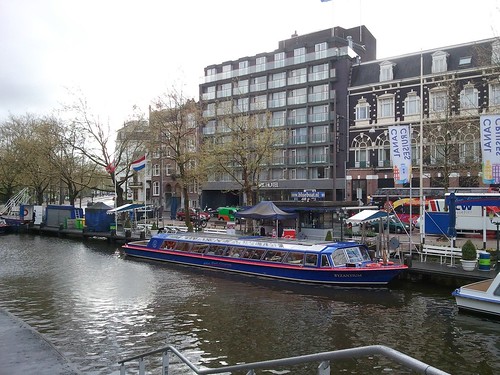 We have two weeks off for Easter. Earlier this week, I went to Amsterdam for a few days with three other teacher friends. I’ve written some blog posts about our time there. We left Monday evening, and originally I wasn’t going to blog about that part of the trip, because it’s mostly travel. But Monday was a special day all by itself, and I need to record it.

Last year, around this time, I had shingles. In my eye. It wasn’t fun.

On the day before the last day of term, I went home instead of doing parents’ evening—I wasn’t feeling very well at all. I ended up staying home on Friday, barely able to get out of bed for the first part of the day. As Saturday rolled around, I seemed to be on the road to recovery … but my right eye started showing some signs of irritation. This worsened on Sunday, and on Monday morning, I phoned my surgery for an appointment with a doctor. I was worried the worst had happened: my shingles had come back. I wanted to get this treated as soon as possible, and I needed to know how it would affect my travel plans.

I love socialized healthcare. Ontario’s is lovely, but we have nothing on the UK NHS. My surgery fit me in for an appointment in the morning without a problem. When my doctor confirmed he thought it was shingles, he booked me for an appointment at the eye clinic the same afternoon. (When I came home from my travels on Thursday, it was to a letter from the NHS informing me of a follow-up appointment with the eye clinic scheduled two weeks from now. This whole process would take months in Ontario.)

I returned home in a very poor state of mind. I was not happy about having shingles twice in two years, especially considering I’m only 24. The unfortunate timing, literally the day I was leaving for a foreign holiday, made everything seem worse. Prior to going to the doctor, I had already begun packing. I continued, albeit somewhat dolorously.

The ophthalmologist disagreed with the diagnosis: it wasn’t shingles, which is caused by a virus called herpes zoster. Instead, the culprit is herpes simplex, which most people recognize as the cause of cold sores. Turns out that, in addition to cold sores on the mouth, it can manifest as an infection around the eye. Joy. I never used to get cold sores (I had my first one last week, in what I no longer believe is a coincidence), and I wonder if this is related somehow to my bout of shingles last year. Whatever the cause, the treatment was the same.

Nevertheless, there was a silver lining. Although I could still infect people who haven’t had chickenpox, the doctor told me I could still travel. (I guess he assumed I wouldn’t go up to people and start rubbing my eye against them.) I was glad I had decided to pack in the morning, because I had very little time to make my way back from the hospital, grab my bag, and head to the train station.

I took a train to Stansted Airport, via Cambridge, and met up with my fellow travellers. We flew on an Easyjet plane to Amsterdam. The flight is forty minutes—it takes longer to fly from Thunder Bay to Toronto!—and passing through customs was no trouble. We took a bus from Schipol Airport into the centre of the city. Alighting outside the Rijksmuseum, we then walked for about five minutes until we found the Flying Pig Hostel tucked away down a side street in the middle of a touristy part of the city.

By this time, it was around 11 pm. We settled our bags into the hostel and then went out to find a place to eat. For the most part, the city looked very much like any other western European metropolis. (I’ll discuss the differences in more detail in the next post.) We ended up walking down a street of restaurants, allowing someone standing outside one restaurant to usher us in with the promise of deals on Italian and Mexican food. We had our first meal in Amsterdam before making our way back to the hostel.

Monday was a study in patience for me. I spent hours sitting in doctor offices, hospitals, on trains, at train stations, at airports, and on planes and buses. I waited for examinations and diagnoses, for departures and arrivals. In the end, the news could have been better, but it could have been worse. At least I got to go on my trip! And I had a good time—but more about that in the next post.

I’m wearing shorts right now. Shorts. In March. OK, I wore shorts in March back in Canada—but towards the end of March, when the snow was actually melting. Today it’s so nice that I can go outside and sit in shorts and a T-shirt without so much as a jacket.…

I don’t like travelling. I’m not like Frodo Baggins; I’m perfectly happy to stay in the Shire. It’s nice there. I don’t relish the interruptions to routine that travelling brings, the fiddly bits required in packing, the problem of hygiene on the road. So I travel sparingly. Instead I live…