Shorts. In March. OK, I wore shorts in March back in Canada—but towards the end of March, when the snow was actually melting. Today it’s so nice that I can go outside and sit in shorts and a T-shirt without so much as a jacket. Crazy.

A few weeks ago, I asked my dad to send me a photo of the snow back home so I could see what I was missing: 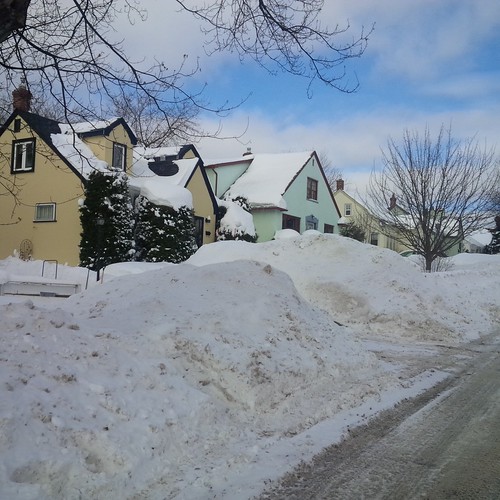 I was thinking about how students and teachers back in Thunder Bay had the day off school twice on the same week that I was enjoying a relaxing half-term break—once for Family Day on Monday, and then, as I learned through Twitter, on Friday for a snow day.

For Canadians, snow days are something magical—maybe even sacred—particularly for children. They are a gift: an unscheduled day off school, with a fresh helping of snow, just lying there, waiting to be transformed into a fort, a snowman, or even that elusive, perfect snowball. I relished snow days as a kid.

Last year over here in England, I experienced my first two snow days as a teacher. Now, a snow day in England is slightly different from a snow day back home. It takes a truly intimidating amount of snow to shut things down back home. Here, snow days happen for what we would call a routine level of snowfall—enough to build a snowman, maybe, if you use your resources wisely. That first snow day I was taking the bus into school, and I didn’t hear about the closure until I was already there. Though someone offered to give me a ride back home, I elected to stay and get some work done anyway. It was a good choice; I felt more organized and still made it home earlier than I usually do on a school day.

On the second snow day, we received the call about ten minutes after leaving Bury. (This was after spending ten minutes scraping, de-icing, and warming up the car—actions that are not as common over here as they are in Canadian winters, and certainly seldom as intensive.) We turned around immediately, and I spent the day curled up at home. The snow wasn’t nice enough to make a snowman. And I might have done some marking. Otherwise, though, it was relaxing.

These breaks aside, last year’s winter was nowhere near as severe as any Canadian winter I’ve experienced … but it was still a winter. This year has been an entirely new experience. I haven’t seen so much as a snowflake this winter. Oh, we’ve had our share of inclement weather: wind and rain, and in the west part of the country the floods have been truly staggering. But on my week off, the temperature climbed and the wind let off. Conditions became mild and balmy, almost warm enough for wearing shorts (and yes, socks and sandals). There were a few days where I bought a cup of tea and took a book down to the Abbey Gardens to sit and read outdoors, something I doubt many people would contemplate doing in Thunder Bay right now. This week has brought even warmer weather: the shorts are out, and I spent more time reading outside today. 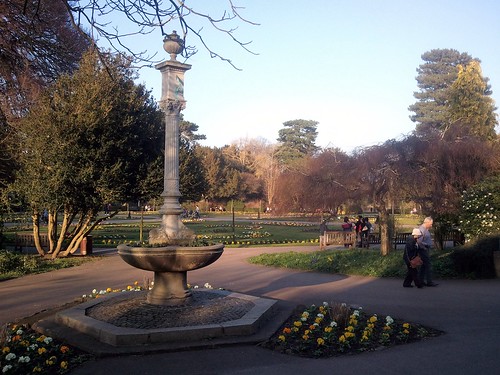 The snow day tweet back home reminded me of the striking contrast in weather between these two places I’ve resided. I experienced a taste of winter when I was in Thunder Bay over Christmas. It was exhilarating and enjoyable. Some Canadians embrace winter through winter sports and activities. Some avoid it, preferring to hibernate as much as possible. Others hate it but accept it as their lot in life. I love winter, and while I’m not that athletic, I do enjoy a good hour or two of shovelling after a big snowfall.

This year, it seems that I’ll be mostly skipping winter. It seems unlikely, given the weather so far, that we’ll receive any snow here in Bury St Edmunds. Even if we do, I doubt it’ll match up to the pittance we received last year. Some people would call this good luck. And yes, I’d be lying if I claimed that I haven’t cherished the warm weather on my week off. Yet I’m not just skipping winter; I’m missing winter. And it’s interesting to think about how that has affected my mood.

One of the joys of having a stable full-time job like teaching is that my work requires a certain routine from me. I know I have to be at work at certain times, and I’ve developed habits that help me stay prepared. These habits are helpful, but the repetition brings a kind of monotony. Seasonal changes bring necessary shifts, transforming the monotony into a cyclic harmony. Without such shifts, my routine goes on … and on … and on … from September to March.

I don’t want to say I’m counting down the days until the summer. (I’m not, though I am very much looking forward to it.) It’s foolish to think that returning home is going to dramatically make me happier, so I shouldn’t fixate on it. My future beyond August is so uncertain. I don’t know when next I’ll have a full-time job teaching. I don’t know what I’ll be doing a year from now. And despite the challenges of my current position, there are so many good and positive experiences that I’d be a fool to discount them.

Whatever happens between now and August, and between August and next year, I know one thing: I’m looking forward to a January 2015 of shovelling, snowball-making, and snowman-building. Here’s to the snow.

For over a year now, I have been knitting a pair of socks. I chose a sock, cuff-first, as my first foray into circular knitting. The circular knitting itself was not difficult to master. Socks themselves, though, have all sorts of … components that require careful attention to detail. This…

We have two weeks off for Easter. Earlier this week, I went to Amsterdam for a few days with three other teacher friends. I’ve written some blog posts about our time there. We left Monday evening, and originally I wasn’t going to blog about that part of the trip, because…