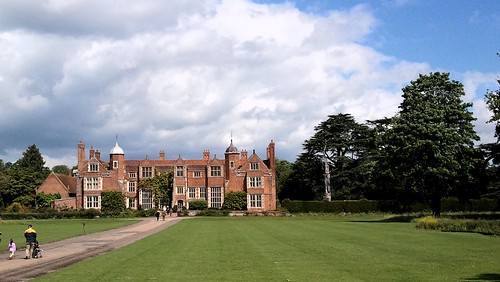 It has been ages since I blogged. There’s plenty I could talk about: TV shows that I have enjoyed lately, the Ontario provincial election and voting by special ballot, my impending return home … and I may indeed get around to blogging about these. For now, though, let’s talk about Kentwell Hall.

Last Sunday, I accompanied my landlady and her daughter to Kentwell Hall Through the Ages. Ordinarily this stately manor house has re-enactments from a single time period (often Tudor). For this weekend only, however, they put on re-enactments from across a six-hundred-year swathe of history. From medieval fletchers and farmers to World War II soldiers and 1970s campers, we got to see little slices of history come alive as we walked around the impressive grounds of this estate. For those of you familiar with Old Fort William, it’s much the same idea.

Upon entering the estate, it’s impossible not to be struck with a sense of the grandeur and magnificence of the house, which is still somewhat off in the distance. Kentwell, and more often just its exterior, has been in numerous television and movie productions, and it’s easy to see why. It is the stereotypical English manor house, and despite the whole estate being a hodgepodge of centuries of upkeep and renovations by various owners with various architectural hang-ups, the house itself remains a harmonious representation of posh countryside living. 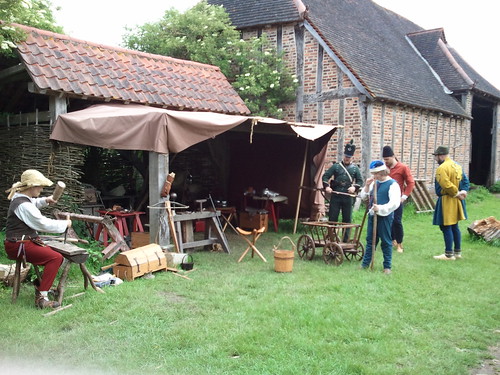 I enjoyed the historical parts of the visit, but I also want to stress how much I just enjoyed walking around the grounds of such a vast estate. There are so many areas to this property, from the Hall itself to the courtyard to the walled garden, the moat, or the gardens on the opposite side of the house. It all reminds me of an Agatha Christie novel: Kentwell is exactly the sort of place where one could comfortably spend a weekend in the 1920s and not actually interact with any other houseguests, unless, of course, there is a murder and one of those guests happens to be Hercule Poirot, in which case you have a delightful mystery on your hands. Now, I’m from Canada, where we are not exactly short on space and it’s easy enough to find people who own vast acreages of farms. But we don’t have many houses as impressive as Kentwell, at least not where I’m from in Canada.

The historical re-enactments serve, then, to remind visitors that the Hall has existed for centuries, and that is purpose has changed slightly throughout this span of time. In medieval times it was very much a feudal, manorial property. The extent of the farm fields and the archery butts, where men and boys had to practise on Sundays, attests to this. We saw various re-enactors dressed in medieval garb fletching arrows and manufacturing various other odds and ends. In the moat house, one of the oldest structures on the property, we saw Tudor-period re-enactors distilling and bottling rosewater.

Peace-obsessed hippies camped out in the sheep fields that led up to the archery butts. As the re-enactors from various time periods marched up to the butts for the “Firepower through the Ages” demonstration, the hippies chanted, “Make peace not war!” in their faces. The actual demonstration was a fascinating exhibition of bows and guns from the medieval period onwards. However, the audience received a reminder of how real and dangerous these weapons could be when a Napoleonic soldier’s rifle misfired while he was packing the muzzle. He was fortunate: he broke his thumb and burned his hand but was otherwise no worse for wear.

I loved touring around the house itself. The courtyard has an interesting maze laid into this brickwork that requires one to navigate from one symbol to another one across the yard by stepping on only certain colours of stone. The interior of the house preserves the flavour of several time periods, with impressive portraits of important historical figures, such as Henry VIII and Queen Elizabeth.

One of the gardens has a weird tree that looks like it was imported from Gormenghast:

Overall, it’s a beautiful property, and the opportunity to see so many different time periods brought to life was a great one. We were lucky that the weather, which has been somewhat overcast and rainy all week, cooperated on that one day to bring us skies that were, if not sunny, at least not stormy. I don’t know how much more touring I’m going to do while I’m sitll in England, so I’m glad that I at least saw Kentwell Hall.