In order to better cover my experiences in detail, I’ve decided to write a post for each day I was away in England, publishing it on the same day this week. I also recorded video footage that I hope to have edited by the end of the week! Without further ado, here’s what happened on Monday.

My flight from Thunder Bay to Pearson left at 6:30 Monday morning, so I was up a few hours before that to finish packing and prepare for what I knew would be the longest day of travel I had ever had. After much Youtubing about folding my sports coat properly, I zipped up my suitcase and headed out in the rain to the car, where my dad was waiting to drive me to the airport.

The flight to Toronto went without incident, and we landed slightly before 8. My flight to England wasn’t until 10 pm. Fortunately, I had arranged for one of my friends from professional year to pick me up. After a brief tour through Terminal 3 to see where I should go that evening and a stop for an unsatisfying breakfast sandwich, I returned to the arrivals area and lurked there until Hélène arrived. We left Pearson along the 401, and I gawked at the busy traffic and tall buildings all the way to our destination: the Ontario Science Centre. 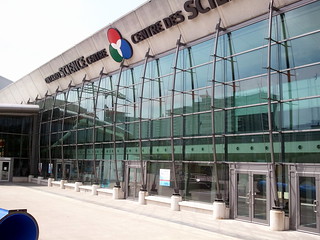 I recall visiting the Science Centre once as a child while staying with my grandparents in Waterloo. However, I don’t recall much about it. So visiting it again as an adult was great. First we hit up the Space exhibit, because it’s the Space exhibit. Then we returned upstairs for the next performance of Star Trek Live: Starfleet Academy, a half-hour interactive adventure involving Vulcan temporal agents, a megalomaniacal Romulan with a bad accent, and lots of Starfleet cadets. The educational component of the experience seems mostly a general feel-good story about human spaceflight combined with some specific information about things like the International Space Station. Still, it was a lot of fun, and I’m not just saying that because Sovak chose me as the first participant in the adventure! 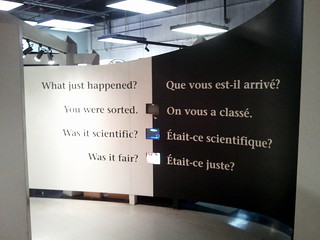 We also checked out Mindstorms (which discusses the workings of the human brain), had lunch, and briefly wandered through a few other areas. Perhaps the exhibit I appreciated most was the one on the “truth”, which encourages us to examine our biases inherent in our perspectives. I expected the straight-up informative exhibits from the Science Centre; I didn’t expect but was pleasantly surprised to see something a little more philosophical there as well. It went over the heads of the kids who were more fascinated with the fancy door mechanism at the entrance of the exhibit. But it had plenty of cool and thought-provoking displays for adults who may have been exposed to “science” all their lives but never questioned what assumptions get put into the science they learn.

Eventually we left and went to a nearby park. I wanted some fresh air and sunlight before resigning myself to eight hours in a plane! Hélène and I sat at a picnic table and played cribbage (she won, handily). In the parking lot nearby, a black SUV sat idling for the entire time. We kept giving it sidelong glances, wondering who would be so inconsiderate as to leave their car running while unoccupied. As we prepared to leave, Hélène boldly decided to peer into the SUV’s window. I was not in favour of this on the off chance it contained some kind of dead body. In fact, it contained a somewhat live but sleeping body (though Hélène’s movement caused him to wake). This solved the mystery of the idling SUV and reassured us that the vehicle was not empty (still, who idles their car in a park while napping?).

We left the park to go to Scarborough and Centennial College, where our mutual friend Katie is teaching classes. We picked up Katie and went to a nearby Swiss Chalet for dinner. Although we have one in Thunder Bay, I haven’t been to Swiss Chalet in a long time, but this one was good. It was nice to see Katie again, and getting to hang out with these two friends was a great way to spend my free day in Toronto. Around 6:30, Hélène and I bid farewell to Katie, and we drove back to the airport.

I checked in with Karianne, our handler from Engage Education, and checked in with the airline, Air Transat. Then I grabbed myself a cup of tea and whiled away another hour using Pearson’s free WiFi. Finally it was time to go through security and prepare for boarding, which is where I met the rest of the participants in iday.

The flight itself wasn’t that bad. I ended up on an aisle seat in the middle three seats of the plane. The fellow to my left was in IT and noticed my Android tablet, so we had a nice little discussion about Android versus iOS and agreed that we preferred the open ecosystem of the former. Always good to meet another Android enthusiast! However, given the late night nature of the flight, the cabin lights dimmed soon after takeoff, and most of us slept—or tried to. I nodded off for an hour or two, but for the most part my sleep was stymied by a sore neck. Try as I might, I couldn’t find a comfortable position; I resigned myself to reading and listening to podcasts.

When we landed in Gatwick it was 10 am Tuesday morning, London time. Which means this will be continued in tomorrow’s post.

It’s been an interesting few weeks. I have a lot I want to blog about—my new tablet, Mass Effect, books, leaving the art gallery, etc. Despite my free time, I keep finding ways not to do it. So far. I’d love to talk about how much I’m enjoying…

The customs line at London Gatwick grew quickly. There must not have been an international flight for few hours, because few stations were open when we arrived, and several of them were being staffed by trainees. We stood in line, dead tired and late to meet our drivers, waiting to…