This has traditionally been a two-cat house. Last August one of our cats, Marble, died. We knew we were going to get another cat eventually, but then our basement flooded and required repairs, so we had to postpone until after Christmas. Finally, the day before New Year’s Eve, we went to the Humane Society to pick out a pet. 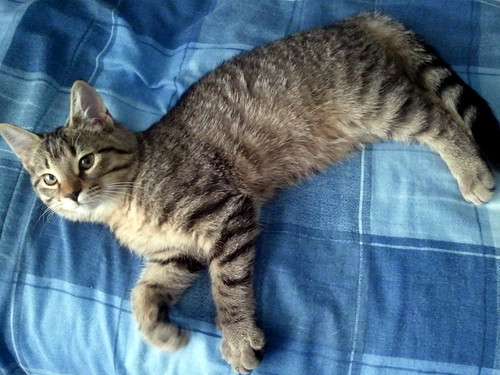 We found Sarah. She is a two-month-old (almost three months now, I guess) tabby. She was one of the first cats we saw when we walked inside, and was probably the youngest female kitten available. (We wanted a female in particular because our surviving cat, Kaylee, is also female.) There were some very cute, older cats, but we thought it would be easier for Kaylee to adjust to the newcomer if it was a relatively young thing. I wasn’t eager to introduce to her a cat that had already developed so many habits and idiosyncrasies. So we selected Sarah, filled out our adoption application, and waited. And waited—it was the New Year’s weekend. My dad was very impatient to get his new kitten!

Eventually, though, Sarah came home to us. We had to keep her confined to the spare room for the first few days, and she was vocal about that. The first time Kaylee laid her eyes on Sarah, her reaction was one of indignant incredulity. She looked at me, almost by way of accusation, and her face said, “What do you think you are doing?” There was a great deal of hissing from Kaylee and a kind of weird growling sound that I had never, ever heard from her before.

As her picture portrays her, Sarah is adorable. She is also cuddly, friendly, and curious. She has an insatiable appetite for playing with the overabundant cat toys in our house, which Kaylee largely disdains. She was extremely eager to climb on things and people when she first arrived and was exploring her new habitat—you were either what she was climbing on or something she was about to climb! I am ticklish, so I tried to discourage her. My dad, on the other hand, enjoys allowing her to climb onto his belly and sleep there while he watches TV. (I, for my part, like that Sarah will lie at my feet when I am at my desk, and I will occasionally lie on my bed and allow her to lie next to me.)

Kaylee and Sarah seem reconciled to one another now. Kaylee still occasionally hisses at Sarah, but seems more out of exasperation than any true malevolence. They sniff at each other in a somewhat amicable manner now. Sarah is quite mischievous, and she loves to sneak up on Kaylee and bat at Kaylee’s tail. Also, we are having quite a time getting Sarah to eat her kitten food. It has gotten to the point where Sarah will be eating Kaylee’s food, so Kaylee will stalk off in a huff and go eat Sarah’s food. They are kind of an odd couple, and they keep my dad and I on our toes, I suppose.

I hope that Sarah provides Kaylee with an energetic companion and perhaps even evokes a sense of youthfulness in Kaylee herself. I don’t know if it’s just that Sarah’s rambunctiousness is a new metre-stick against which I measure her, or if it’s the lingering sense of mortality since Marble’s death, but I am acutely aware of Kaylee’s age and very sensitive to how she moves and acts these days. She still has some fire in her, swatting at string sometimes or “killing” a toy mouse and then bringing it to me for inspection, approval, and bounty. Hopefully Sarah’s antics will draw out some more of that fire in positive ways.