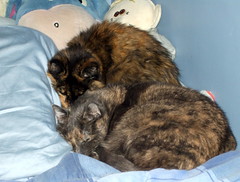 This morning, we had two cats. Their names were Marble and Kaylee; they were sisters. I don't remember exactly when we got them, for I was very young, but they must have been 12 years old or even older. So they have been around for most of my life now, and I have grown accustomed to their curmudgeonly feline ways. Upon moving into our newest residence in 2007, Marble took up the habit of sleeping on my bed, while Kaylee appropriated my new reading chair for herself. These arrangements continued for another three and a half years.

As of this afternoon, we have one cat. Marble died sometime around two o'clock, by my reckoning. I am sorry to see her go, but she was old and ill, and I suppose it was her time.

For about a year now, Marble has not been well. She was having difficulties using the litter box, but the vet could not find anything wrong with her—our options were, essentially, switch her to some new fattening food or put her down, and I think it's obvious there was only one option there. We tried this, and meanwhile Marble seemed stable—she did not improve, and despite the new food, she remained underweight, but she did not get any worse either. This changed in the past week, with further accidents. We had switched her litter, and on Friday I even went to buy her a new litter box that would hopefully be easier for her to use—I was worried her arthritis was giving her too much trouble.

So this has been long in coming, but even so it was a shock. Worse still, my dad is out of town on business this week. When I arrived home from driving him to the airport, Marble was lying on her side behind my computer chair. She was still breathing, but otherwise she did not make many responses to my stimulus—ordinarily she would get up and move away if I prodded her repeatedly; but she only rasped. Not good. I called the emergency number of our vet and brought Marble as fast as I could, but it was too late. By the time the vet looked at her, Marble was gone.

Suffice it to say, this has not been the day I expected it to be.

After the immediate tears and grief that I suppose are natural, not to mention the recrimination that I should have acted faster, should have been more attentive to Marble's suffering, I feel more introspective now than anything. (This is the first time, believe it or not, that I have lost someone close to me, whether pet or human.) Although an inopportune time and certainly something I didn't want to deal with alone, Marble's death does mean we don't have to watch her slowly decline further to the point where we must make that fateful decision.

Of course, I will miss Marble more than I realize right now. I am used to her presence, and it's odd to think that I'm never going to see her pace into view of my doorway again, never going to have to shoo her off my bed so I can go to sleep, never going to have the pleasure of brushing her while watching some late night television. Because, and non-cat owners might not get this, but cats are most certainly people too.

Kaylee? She is like a Terminator—no, not in the sense that she has been sent back in time to kill John Connor, although I'm sure she could do that if she wanted to. She just keeps going though (maybe she's more like a predatory Energizer bunny?). I've never seen her sick, and though she is the same age as Marble, she is healthy, of a good weight (perhaps too good), and always chipper—except when we haven't fed her in the last hour. She spent most of the afternoon on her chair, as she is wont to do. I don't think she's noticed Marble's absence yet—although it's weird, because Marble was lying about a metre and a half away from where Kaylee was when I got home, and one would think she would notice and react to Marble's distress. In any event, I am glad Kaylee is still around. She is a rock of feline normality to which I can cling for the foreseeable future. 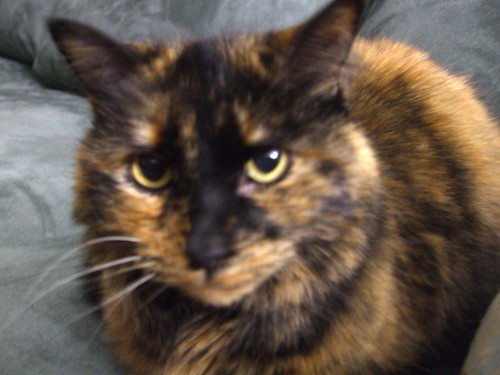 Updated my “About Me” page →