This post was published 13 years ago. Some of its information or my opinions might be out of date.

I'm still alive.((Although chances are equally good I'm just a component of a massive set of equations which we happen to perceive as the Universe.))

Actually, when all is said and done, the wisdom teeth extraction was Not That Bad. I went in, the assistant hooked me up to various Machines That Go Ping!, gave me some nitrous oxide to relax, then stuck me with an IV. I drifted off to neverneverland. The next thing I know, the assistant is asking me to come lie down on a bed in a little recovery room. I do so and start to read my book. In about five minutes I'm fully lucid and feeling quite well.

I won't rub it in, but I had no swelling, no bruising, and no pain. I took a couple of painkillers on Friday but kicked them after Saturday morning. I had pizza--in small bites--for dinner on Friday, although I stuck with yogurt, Jello, and very soft food until Tuesday. My jaw feels a bit different when I chew, but overall it was a painless procedure.((Aside from the part where I give them a substantial chunk of money, of course.)) All that trepidation....

These past few weeks--I'd like to say almost all of May as well, but I don't want to be melodramatic here--have been draining. Or maybe it's just that today was draining and I'm projecting. Nevertheless, the jumbled sequence of one-off events and above-average activity has left me breathless and tired. I need a vacation, but that was my vacation. Next week I start working full time. Yay.

While I could digress now and talk about how I'm not all that enthusiastic about working full time this summer, there would be no point. It's going to happen. And my job isn't bad at all--I just find it difficult to spend eight hours there, especially on the slow days. So I'm going to focus on the positives. There's the money, of course. My fellow front desk attendants are nice people, and I'm essentially being paid to hang out with one of them for eight hours.((It's dangerous to get into that mindset, though. I'm actually being paid to work, not socialize.))

Aside from the money, the other big advantage is that I'll finally have a schedule again. Now, I'm not a creature of routine. My daily routine has constants, true, but I often vary most of my activities. I am, however, a creature of habit. Hence, May and early June's dense schedule of stress has played havoc with my habits. Even though working full-time eats up my free time, it at least means I can stop worrying that I'll be asked to work a bingo or take on three extra shifts at the end of the week....

I'm also feeling creatively unfocused as of late. I have plenty of projects on the go, some of which are in danger of becoming brain crack. Every time I try to sit down and work on one, however, my mind turns to the other projects, and I find it hard to accomplish anything. Even writing blog posts feels lacks lustre; I've some ideas for potential posts but very little desire to actually compose them. This isn't an "I Suck" phase (thankfully) but a "Why Bother?" phase, and my apathy is beginning to annoy me.

Additionally, I seem to be stuck in a passive-receptive mode when it comes to information. There's an incredible amount of amazing and cool stuff happening in the world outside the Box That Is My Room. So much so that all I can do is absorb it osmotically. My feed subscriptions push hundreds of articles at me, and Twitter and Facebook push a myriad of other interesting items in my direction. It's not information overload though. I don't fanatically check my feeds; I read them once or twice a day. Other people just seem to be producing so much, it only strengthens my apathy toward creating my own things. And that's just a wrong-headed idea, and I know it's a wrong-headed idea, and I am severely disappointed in myself.((Bad Ben! Don't make me use the newspaper!)) 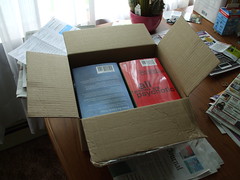 About the only thing that pushes my buttons right now is reading (as always). I had to order a couple of books for birthday presents, so I took the opportunity to order everything that was in my Chapters shopping cart, even though I still have plenty of books waiting from my last trip to Chapters! And naturally, I had to buy duplicates when I didn't own the book I was giving away.... Anyway, I placed the order on Sunday, and the first part arrived on Wednesday. I love Chapters.

Of course, there's so many books I read and not enough time in which to read them! I'm coming across more and more interesting books that I mark as to-read; it's staggering. Thus I feel a soul-wrenching, pent-up desire to devour literature at an awesome and terrifying rate. There just aren't enough hours in the day.

I've always been an avid reader, but over the past couple of years my passion has only intensified. Part of this is due to Goodreads, of course, but it's not the sole culprit. I'm not sure why else though. Maybe as I've matured, I've started to pursue my interests in a more organized, systematic fashion (and Goodreads facilitates this for my reading). As a result, knowing that I have a plan, knowing that there's all these books I want to read now, makes me more eager to read as much as possible. Maybe I've always been this crazy and my friends were just too afraid to tell me, lest I murder them in their sleep by inflicting a thousand tiny papercuts. I'd never do that, of course!((I'd hire ninjas to inflict the thousand tiny papercuts.))

Suggestions for how to focus my creativity are welcome, but I'm not interested in GTD evangelization here. My projects are not to-do style endeavours--although I have tried keeping track of them with to-do lists. Aim more toward the area around reconciling your desire to devote time to creating stuff with your desire to drink prodigious amounts of tea while reading books by the truckload.((If someone ever installs vending machines that serve "tea and a book", I will be doomed.))

Let me get this straight: time goes forward?

I intended to post this two days ago, but somehow never got around to it. You know you need to blog more when your grandparents remark on your inactivity. So let's do this! The past few weeks have been, for the most part, uneventful (and that's good). I worked a…

Help me listen my way through summer

During the summer, I bike to work. I could pretend that this is because I want to be green and stay in shape, but it's really because I don't have consistent access to a vehicle. Although it is good exercise, I must admit. The ride is about twenty minutes one-way.…