The removal of books from schools seems to be a hot topic of late. It’s happening more and more across the US, mostly as a result of school boards being taken over by more conservative trustees. When these things happen south of the border, we Canadians tend to peer down our nose at our neighbours, shrug, and mention how grateful we are “this kind of thing” doesn’t happen here. Except, invariably, that kind of thing—whether it’s police brutality, immigration detention, etc.—is already happening here. Or at least in the case of book banning, there are definitely people who, much like Gretchen Wieners and “fetch,” are very much trying to make it happen in Canada too.

Apparently, last week a teacher presented at a meeting of the Waterloo Region School Board, questioning the presence of certain books in school libraries. I’ve been taking a break from Twitter the past weeks; otherwise, I would have heard (and probably tweeted) about this earlier. But when I did hear about this, I felt sad. A little angry. And targeted.

I did not watch the video of the delegation; self-harm is not on my list of things to do tonight. According to Global News, Carolyn Burjoski questioned two books in particular: Rick, by Alex Gino, and a book that sounds very much like The Other Boy, by M.G. Hennessey. I have read neither, but the first is about a middle schooler who is asexual, and the second is about a 12-year-old trans boy.

I am asexual. I am also trans. I am also a teacher. So when another teacher comes for these books, claiming that their content is inappropriate for younger readers, you might understand how I’m going to take this personally.

The chair of the meeting ended Burjoski’s delegation early (after several warnings), citing the Ontario Human Rights Code and apologizing afterwards for the harm that hearing this delegation might have caused to the board’s trans students. This was the right call, and it heartens me that this action was taken.

I’m really happy that the board heard from various delegations in support of 2SLGBTQ+ representation in its school libraries at its next meeting.

Burjoski has since gone on to claim that she is a victim of cancel culture, and I’m sure she will soon have plenty of media appearances lined up with the Kays and Levants of our country, eager to champion the cause of this embattled, misunderstood white woman just trying to defend the children.

Moreover, once again, the media is focusing on the wrong part of the story and is therefore a part of the problem.

Time and again, these issues come up, and the sea lions always bark loudly enough that the conversation becomes about “free speech.” That is what the pundits on Burjoski’s side are going to say, trotting out the same tired think pieces they have published any time their hate speech is rightfully cut short. And sure, I could write a post about why this is not about free speech. But I don’t want to be a part of that narrative.

The media should be focusing on what chairperson Scott Piatkowski swiftly recognized: Burjoski’s actions harmed children who are 2SLGBTQ+ or questioning. Beyond that, journalists need to be connecting the dots here. Burjoski said, “My few comments expressed concerns about age-inappropriate sexual content. I did not and do not question the rights of transpersons to exist in any way.” This is literally the playbook of anyone who wants to get 2SLGBTQ+ content banned: claim it’s “to protect the children” but when anyone calls you on your hatred, simultaneously say you’re still all about the rights of adult trans people. The media needs to call out this sophistry for what it is.

You cannot support the rights of trans people to exist while also saying that 2SLGBTQ+ identities or content are age-inappropriate. If you think that, you think that being straight and cisgender is the default, and I need you to take those thoughts and question them right now, because that is gross.

“But what if it was just those books; what if they really did have some graphic or inappropriate sexual content in them?” It seems pretty clear that is not the case. Also, school librarians are really fucking smart and would probably notice that kind of thing. If someone is showing up in public trying to get a book removed, it’s never because the book is legitimately inappropriate. It is always about hate. Always.

When I looked up Rick on Goodreads, the top user-asked question about this book reads:

So I really really want to read this book because I am questioning my sexuality, but my parents are very homophobic so I can't buy it. I can't borrow it from the library because of Covid-19, is there a way I can read this online?

That made me sad all over again.

A month from today will be my second anniversary of my transition (yes, I will blog about it). One reason I did not come out until I was thirty was simply because I was not exposed to enough transgender representation when I was younger. The same is true for asexuality, though I was fortunate enough to find my way to that label in my early twenties nonetheless. While I won’t pretend I had an unhappy or difficult youth like many closeted or questioning children, I will always have to wonder what my life might have been like if I had realized and been able to transition, happily and supported by my community, at a younger age. But society’s marginalization of trans people robbed that possibility from me, and the Carolyn Burjoskis of the world would like to keep that door closed for the children of today and tomorrow.

If you want to protect children, you have to protect all of the children, including the asexual and transgender ones. This is not negotiable.

And the fact that Burjoski is a teacher, on top of the ace and trans content of the books in question, makes this a thousand times more hurtful and personal to me. Despite having wonderful colleagues and a supportive school board, I was still so incredibly apprehensive to transition in my workplace, and it is because I knew that people like her exist not just in our society but in my profession. There are colleagues out there who harbour these views, and maybe if I met them they would be polite to my face. Maybe they have sufficient cognitive dissonance that they would even be supportive of my trans rights because I transitioned as an adult—yet at the same time, if I were the kid they were teaching today, they would do everything in their power to stop me from hearing about trans people, thinking about trans people, or questioning my gender.

But really the question that echoed through my head the entire time I was reading about this fiasco was a much simpler one: do you expect me to disappear?

You see, my existence is a threat to the Burjoskis of the world. I am far more dangerous than any book on a school library shelf can ever be. I am your worst enemy: a happy, successful, visible trans person.

I am who some of these kids might grow up to be, if we shower them with the love and acceptance they deserve instead of shame. And every time I interact with young students, they see me: an out, visibly trans teacher who cannot hide how joyous her transition has been. 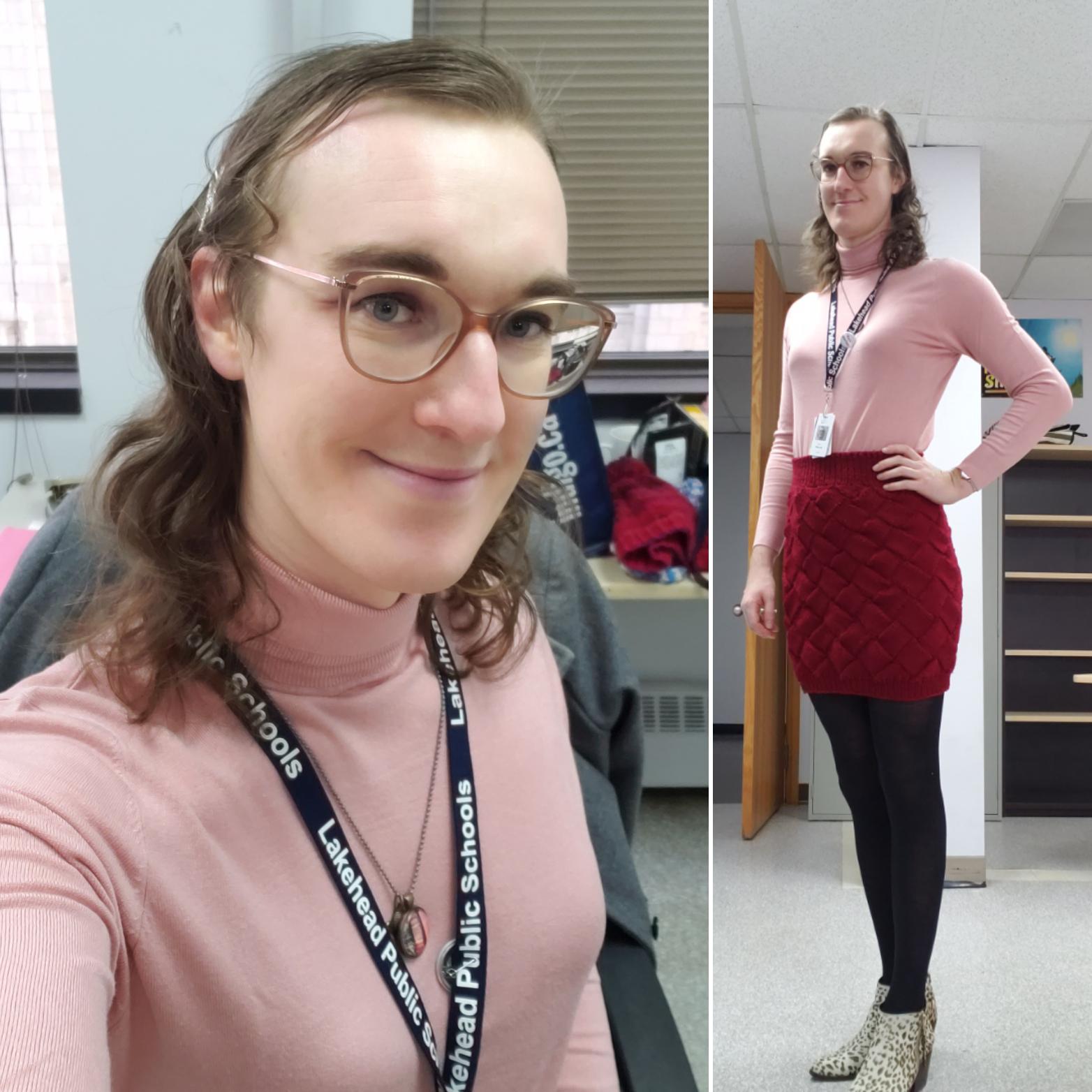 I’m not going anywhere. I’m never going to shut up. But I also need cis people to do what Piatkowski and others have been doing: push back against this nonsense, and stop allowing transphobes to frame this as being about free speech or appropriate content. I need you to be as joyously affirming as I am, in our libraries, in our classrooms, and in your home.

Lately I’ve been curling my hair a couple of times a week before work. Just putting in some gentle waves. You can see my attempt from this morning in the above photo. I am obsessed with this look. I feel so good about myself all day—even after I’ve taken off my makeup and am getting ready for bed. I look into the mirror, see the gentle waves and curls, and my face lights up.

“No,” a voice in my head says, “this is you as you have always been. You’re just finally getting to see yourself clearly.”

Let’s give trans kids a chance to see themselves clearly too. 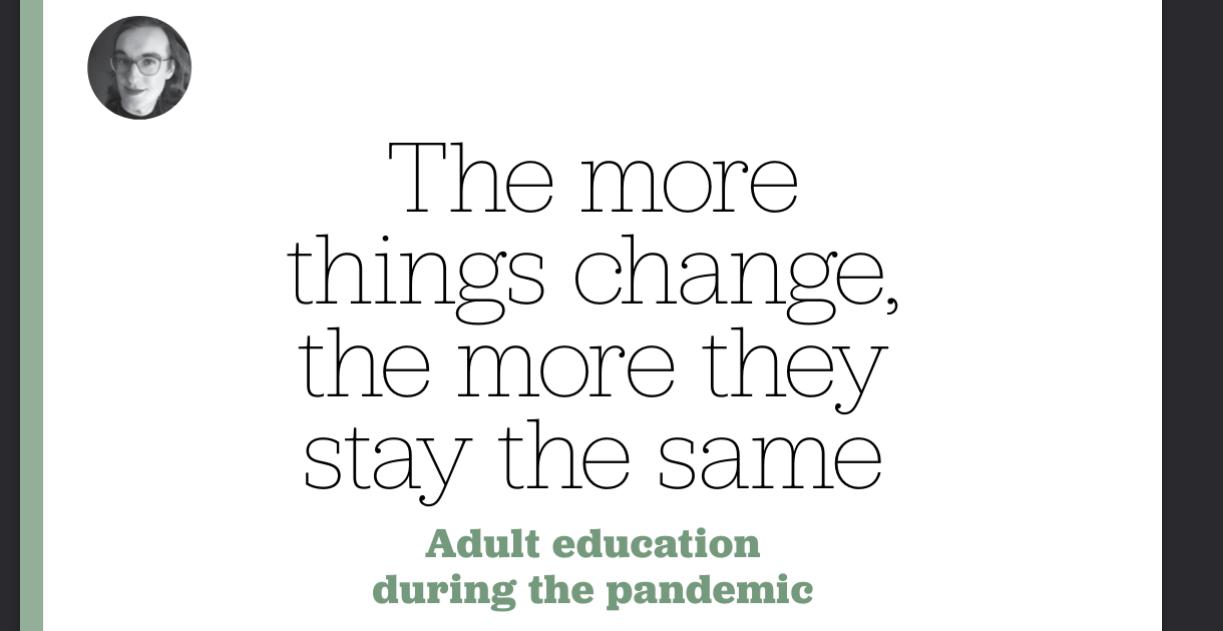 I wrote a thing (about education)

Did you know that the Canadian Centre for Policy Alternatives publishes an education journal called Our Schools/Our Selves? Neither did I, until I saw a call for proposals for articles related to teaching during the pandemic. My proposal to write about adult and continuing education during the pandemic was… 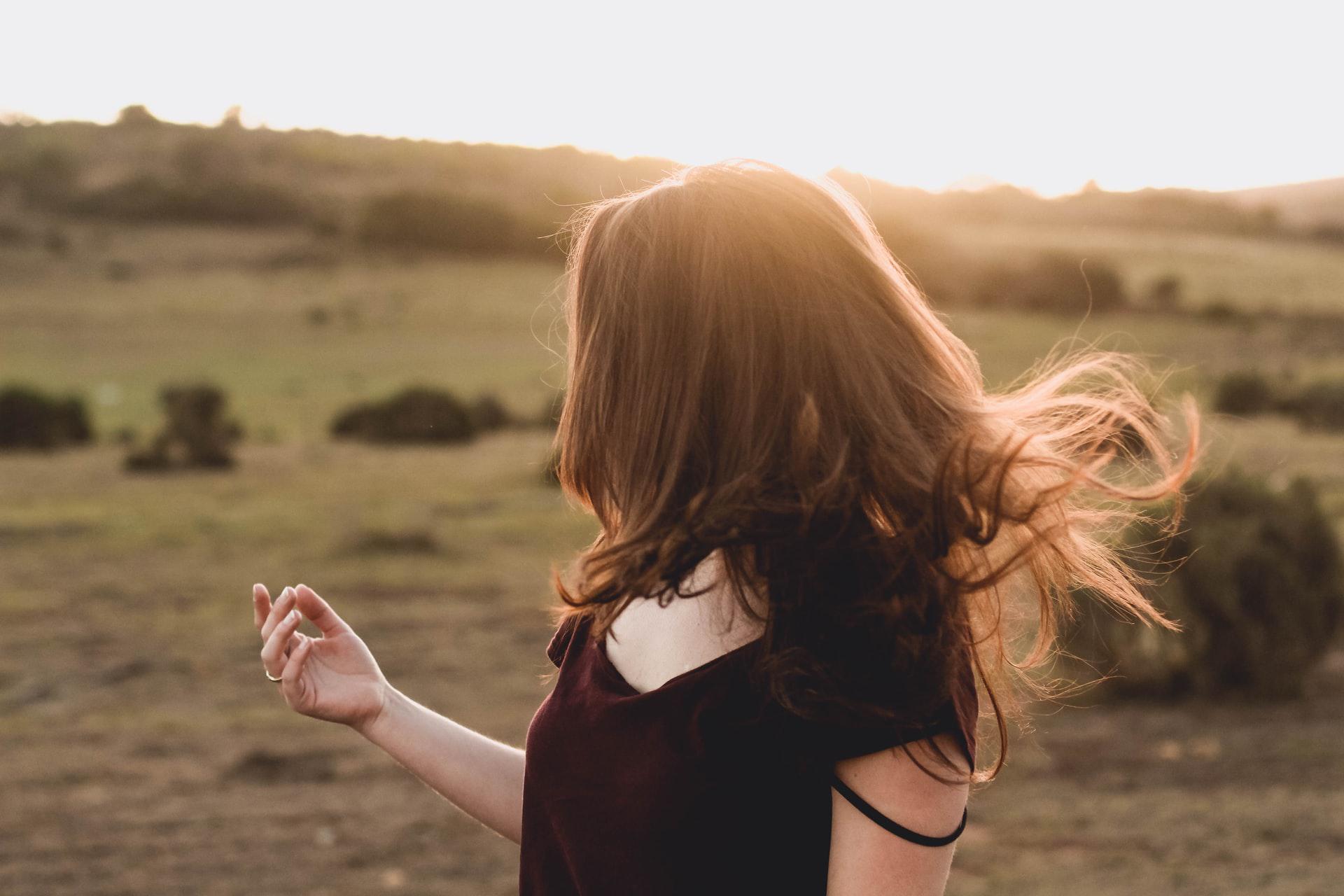 One surprise during my transition has been how my relationship with my hair has changed as I have grown it out, and the way this affects not only how I see my body but also how I move through social spaces.