This post was published a year ago. Some of its information or my opinions might be out of date.

I don’t remember the first time I saw a transgender person portrayed on screen. Probably my first memory of someone crossdressing is Mrs. Doubtfire, a movie which, like so many movies in our childhood, I enjoyed as a kid and now look back up with a cringey awareness of how problematic it is. So, for as long as I can remember, I only knew that the representation of trans people in TV and movies was very problematic. I didn’t learn about transgender people and issues from TV, or even from books—I learned about it from the Internet, mostly from Twitter. And it makes me wonder: if portrayals of trans people had been more numerous, and better, when I was a kid, would I have come out to myself sooner?

Disclosure is a documentary that premiered at Sundance and was recently picked up by Netflix and is about transgender representation on screen. The format is simple: numerous trans people of all genders share their thoughts in interview format, and in between, we get clips from specific TV shows or movies. The simplicity of this format really appealed to me and made it easy to dip in and out of the film, which I appreciated. For us trans people, this could be a difficult film to watch because of the potentially triggering or at the very least problematic subject matter being discussed. Nevertheless, having watched the whole film now, I can recommend it for everyone, cis and trans alike. 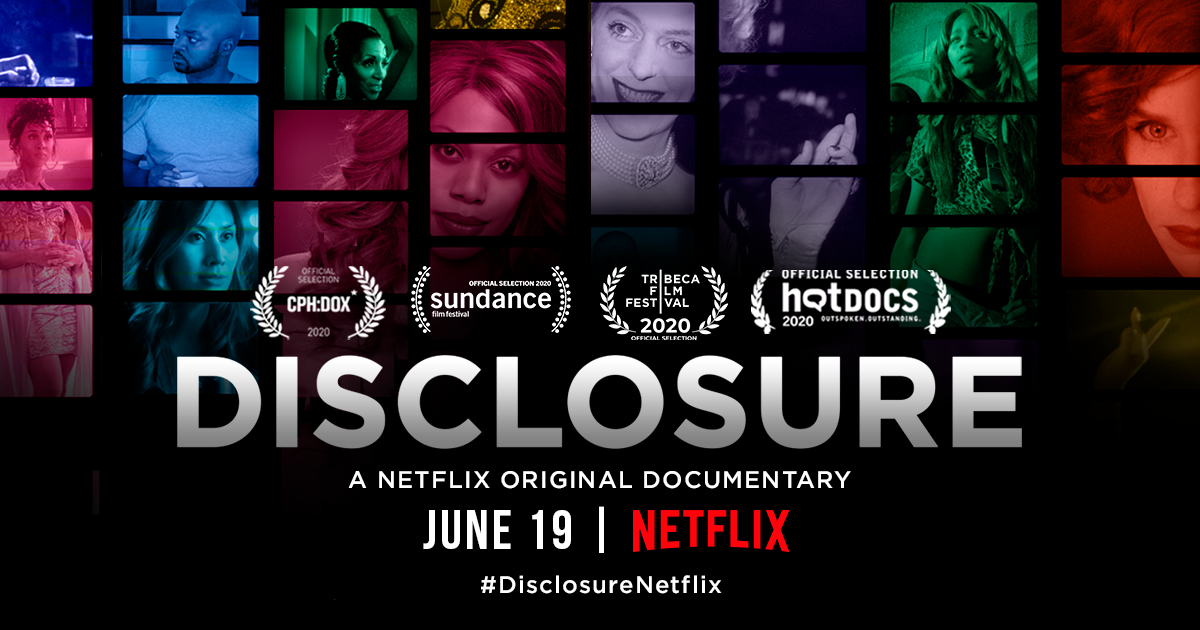 It’s important to note that Disclosure is made by trans people. Not only is director Sam Feder trans, but he also hired trans people to crew the film whenever possible (and non-trans crew mentored trans people where that was not possible). This is so important, because time and again we have outsiders coming in and filming documentaries about marginalized groups. These outsiders may have the best of intentions, but at the end of the day there is still no substitute for letting marginalized people tell their own stories. Disclosure is made by trans people, on camera and off. But it’s not made specifically for trans people.

Why does representation matter? Part of it is, as I alluded to in my introduction, that trans people deserve to recognize themselves on screen. This is particularly important for trans youth. It is difficult and confusing, growing up and realizing you’re different and then not seeing that difference represented anywhere. The other reason representation matters is that, as Laverne Cox points out in Disclosure, the vast majority of cisgender people do not personally know a trans person. That was my case up until recently. If that’s the case, then all they learn about trans people comes from media. And as this film points out, if media only portrays as us the butt of a joke, or as sick, perhaps even dangerous people, then why should we be so surprised that cisgender people see us this way in real life? They literally have no other examples.

Disclosure points out that trans people have always been on screen (with varying degrees of quality of their portrayl) for the entire history of cinema. This reminds me of a similar documentary, Reel Injun, which I often screen for my English class when we discuss stereotypes. It’s really important to be aware of the stereotypes in our media and how we internalize those. I keep coming back to how the portrayal of trans people (particularly trans women) as a joke or as something sick is ultimately an act of misogyny. Portrayals of men "becoming" or dressing as women are played for laughs or played as horrible because that's how our society, often, views women: as laughable or as something shameful.

For this reason, while there are a ton of great quotes in this documentary, this one from Jen Richards really resonated with me:

A lot of people will look at trans women's performance of femininity and see it as somehow reinforcing the worst patriarchal stereotypes of women, and I think it's really unfair and ahistorical to foist that same perspective on people who are just trying to survive.

One of my greatest insecurities during this stage of my transition has been the ways in which I portray my femininity. I am embracing many things that are stereotypical of femininity precisely because I denied myself them when I was younger; now that I can have them, I want them. Yet I’m aware that these forms of expression are stereotypes and do not make one a woman. This is the catch-22 that trans women face: if we reject stereotypical feminine expression (and therefore we likely don’t “pass”), we’re ostracized and told we aren’t real women; yet if we embrace stereotypical feminine expression, we’re ostracized and told we’re trying too hard or making a mockery of real women. We can’t win—but we can’t win because transphobia is and always has been rooted deep in misogyny. This is why there can be no place for trans-exclusion within feminism, despite what some might have you believe.

Looking back at my media consumption all my life, I have always enjoyed shows with female protagonists a lot more, or identified with the female main characters of ensemble casts. From Kim Possible and Lizzie McGuire on the Family Channel (that’s the discount Canadian version of the Disney Channel!) to Jewel Staite as Catalina in Space Cases (and then, yes, Kaylee in Firefly), I had an affinity for—rather than attraction to—women on screen. What would it have been like if I had seen more trans women portrayed sympathetically and humanly?

Things are getting better, certainly, as Disclosure observes with some of the more recent examples. For me, watching Nicole Maines in Supergirl was a tiny revelation in this trans girl’s brain: here was a trans actor, playing a trans woman, on a major TV show, as a three-dimensional character. Her trans identity is an important part of her character, but it is not the only part of her character; her arc and development are so much more than that. Asia Kate Dillon as a non-binary character in John Wick 3 (and also, apparently, in Billions, which I did not know, gotta check that out!) is so important given the almost total erasure of non-binary identities from conversations involving trans people.

Yet we are still hiring cis people to play trans characters, and we’re still making trans identities the punchline. Until that stops, until we have more representation, better representation, we won’t have gone far enough. And even then, as the documentary carefully articulates in its final act, representation only matters if it turns into action to materially improve the lives of trans people in our society.

That’s what it comes down to, as I explained in my last post. As we become more visible, more represented, in media and in society, we have fallen increasingly under attack. Transphobic people seek to curtail our rights, increase discrimination against us, and paint us sick and predatory. But they can only be successful if the majority remain in ignorance about trans people. That’s why you and all your friends need to watch Disclosure.

Somewhere out there is a young trans girl, or trans boy, or non-binary kid, who is searching desperately for themselves in the media they consume. You owe it to them—we owe it to them—to learn about gender, to unpack the constraints we place on everyone, and to make our society better for them. Because that’s what the TERFs are afraid of: they know that trans people aren’t sick at all; rather, we are free. And that scares them so much, because our refusal to be boxed into a biological gender category threatens the basis for their second-wave fight for autonomy over women’s bodies. But trans inclusion is not a revolution in feminism; it’s an evolution. Freedom from the constraints of gender does not mean gender is an illusion. Freedom from the constraints of gender is a beautiful thing for us all, trans or cis or however you identify.

It is my hope that Disclosure, available such as it is on a large platform like Netflix, goes towards building that empathy we so desperately need, as I mentioned in my last blog post. I want cis people to watch it and understand the harm that media representation has done to trans people, but I also want you to understand the amazing opportunity for growth as well. As the documentary mentions, people like Katie Couric and Oprah made mistakes, and then over the years, grew and learned and apologized and moved on. That’s what you can do too; that’s what we can do. As long as we are alive and breathing and willing to learn, we can always do better.

But it begins by opening your eyes, your ears, and most importantly, your heart, and letting yourself believe that trans people are people who deserve not fear, not pity, not laughter, but compassion and dignity and acceptance.

When they come for you

I largely try to stay out of "discourse" on social media these days, and coming out is not going to change that. But for the record…

A quick reminder to cis allies about how small words of affirmation have an outsize importance on the lives of your trans friends.