I gave in and bought a new phone last week. It arrived on Tuesday.

Specifically, I bought a 32 GB black Nexus 5 from the Google Play Store. 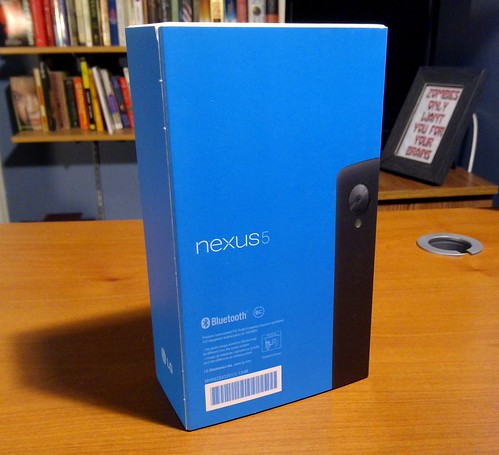 My former (and first) smartphone was a Samsung Galaxy Captivate (that is, the original Galaxy S phone). I don’t think it ever received an update beyond Android 2.2—I don’t know, though, because I eventually grew brave enough to flash CyanogenMod to it, freeing me from the tyranny of TouchWiz, and there was much rejoicing. Noether (I name all my devices after dead mathematicians), has been an admirable companion for four years. I feel bad that I’m replacing it before it has totally stopped functioning. But it’s kind of like my car.

I’m currently driving my dad’s 1996 Mazda Protege. It’s a great car, and it drives very well—but it’s nearly 20 years old, and Canadian winters and Thunder Bay roads have been tough on it. When my dad first bought his Mazda 3 a few years ago, I compared its handling and computerized steering unfavourably to the Protege. Now the tables are slowly but inexorably turning: the Protege still drives, but it seems like every week there is a new fault or nuisance that either is costly to fix or must be tolerated until we decide the car has reached end-of-life (which is hopefully this spring). Much like the Protege, Noether’s performance has started to degrade to the point past frustrating and well into inconvenient: poor battery life (even after buying a new battery), really laggy performance, crashing apps, refusing to answer incoming calls, and most recently, an overly-sensitive power button that turned the screen on (or off) without much hesitation…. I could—and have—put up with it—but I shouldn’t have to. What’s the point of having a smartphone if it’s actually very usable on a daily basis?

And then there’s the march of time and progress. The smartphone market (unlike, say, the tablet market) is still improving at such a tremendous rate that while it might not be morally defensible to upgrade one’s device every year, there are definitely practical benefits to doing so. The Protege is a good car: it drives, and it drives well. But since its creation, automotive design has moved on. It lacks certain conveniences like power locks, a stereo that isn’t a tape deck (I hear new cars come with turn tables these days for better sound quality?), etc. None of these bells and whistles make it a worse vehicle—but as they become increasingly common, they become nice to have, if you are in a position to afford them and need to buy a new vehicle. Similarly, performance issues aside, Noether did what I needed a smartphone to do. But in the three years since I’ve had it, Samsung has released four more Galaxy phones. The specs on my new Nexus are incredible compared to Noether.

I could conceivably have spent more time researching some of Noether’s issues, but I had another reason for upgrading: release cycles, and Big Phone.

I opted for a Nexus device because I had heard good things. I like a fairly stock Android experience (CyanogenMod tweaks notwithstanding). I knew that the Nexus 5 was reasonably priced considering its hardware. I could have gotten it for free from my carrier with a contract, but I switched to prepaid just before I moved to the UK, and I haven’t switched back yet, because it is much cheaper than a contract and meets my needs. The Nexus 5 was $100 more expensive unlocked from TbayTel than from the Play Store. No brainer where I was buying it.

I chose the 5, as opposed to the shiny new Nexus 6, because it was less expensive and not as big. I’m sure the people who claim you grow accustomed to the big phones are right—but I am curmudgeonly and don’t particularly want to grow accustomed to them. My Nexus 5 is bigger than Noether, but not by that much.

The Nexus 5 also has an official upgrade to Android 5.0, Lollipop. Again, I hear good things. I want to get in on the version 5 hype and all the little boosts it apparently brings. I wanted to buy a Nexus 5 before they stop stocking them—not sure when it will happen, but I suspect its days are numbered. So I had a limited window of opportunity to get the device I did want, or I would be forced (when Noether finally gave out altogether) to buy a more expensive phone that was bigger than I wanted (or a non-Nexus device, which was an option but definitely not optimal). Furthermore, as I explain below, I want to keep my gear for as long as I can before upgrading. I was pretty sure from my research that I would be happy with a Nexus 5 and that it would meet my needs for three or four years at least. Better that than wait on the uncertain future of next year’s releases.

I unboxed the new phone Tuesday night, but I decided it was too late to turn it on and configure it. (Also, I wanted to play Dragon Age 2. I am addicted now.) I knew from experience that if I started tinkering with the phone that night, I would be up way too late. And I do have multiple jobs now.

So I forbore until Wednesday morning, which gave me several hours before I had to go to my first job. My first order of business was to ascertain which hoops I’d have to jump through to get Lollipop. The phone shipped with 4.4.3 and downloaded and prompted me to install 4.4.4. But after doing so, no luck with an OTA update to 5.0. So it goes.

So I had to delve into the world of bootloader unlocking and flashing through adb. (Back when I first flashed CyanogenMod to Noether, it was a simple affair. My Captivate’s bootloader came unlocked—gasp—and so all I had to do was put it in download mode and send over the custom recovery image.) Fortunately, the instructions on Google’s factory image download page were pretty easy to follow. Once I figured out I had to enable USB debugging to let adb see my device (duh), installing Lollipop was as downloading the image and entering the commands Google gave me. In less than ten minutes, my phone had rebooted and was now showing the new, improved setup experience (yay for 2-factor authentication built into setup!).

I have decided to call my new phone Hadamard.

It took a few more hours to transfer my music and Titanium Backup files from Noether to Hadamard. (I am happy I paid the extra $50 to double my space. The inability to use external storage is perhaps the Nexus 5’s most inflexible limitation. Software can do amazing things—the camera is not great, but Google’s new camera app compensates—but it can’t really do a lot about storage space.) This involved many micro-USB cables and my computer reluctantly serving as a go-between. I spent most of the time while this happened fondling Hadamard (OK, that sounded wrong) and generally feeling very pleased with myself. I kind of feel entitled to considering how much I spent.

I don’t understand people who drop thousands of dollars a year just to get the latest gear. If you want to do that and have the disposable income to support that lifestyle, then hey, all the more power to you—I just don’t understand you. This phone is an investment. I am incredibly privileged to be in the position to afford one and live in a country with the (albeit one of the most expensive) systems and infrastructure in place to support its use. My trusty Dell Inspiron is still going, seven years strong, even though my phone now has the same amount of RAM and a higher-resolution display. Noether stayed with me for four years; hopefully Hadamard will last at least as long.

I need to blog about my new job(s), and I’ll also blog soon about my thoughts about the Nexus 5 and Android 5. When I find time….