As I have mentioned in the past, I am a fan of Android, Google's operating system for smartphones. I'm a fan without having ever owned a smartphone, let alone an Android phone. As of last week, my friends, that has all changed.

My carrier, TbayTel, recently signed a deal with Big Bad Teleco Rogers, in which TbayTel takes over all of the Rogers customer and infrastructure in the area, and everyone gets access to HSPA phones and a 3G network. The upshot of this, as it relates to me, is that TbayTel now has a good many more smartphones, including several running Android. Cue the drooling. 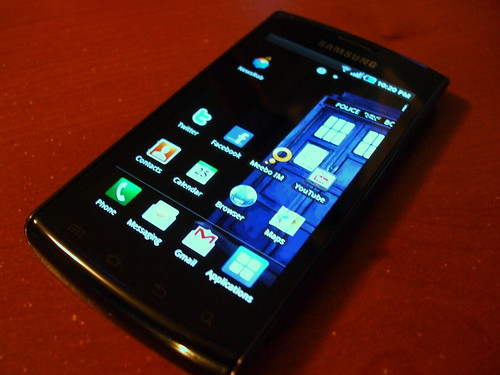 Last Monday, my father and I braved the crazy lineup at the store to purchase me a Samsung Galaxy S Captivate, which was $150 with a three-year contract. It is running Android 2.1, Eclair, and so far it is awesome.

I debated getting a new phone for all of three hours when I heard the news. My old phone, which was my first phone, was an LG 6200. It worked fine, aside from some interesting glitches with the contact management, but there were two drawbacks: firstly, I had no way of connecting it to my computer; secondly, it wasn't a smartphone.

The reason I want a smartphone is simple: I don't have much use for a mobile phone. I don't call very many people. I do use my phone for that purpose, but with a smartphone I envision myself spending more time reading and composing email. What I want is not a mobile phone, but a mobile computing device that also happens to make phone calls. So while I felt bad about discarding my old phone while it still worked, I also felt like the time was right to upgrade.

And I don't regret my decision. Android is every bit as awesome as I anticipated it would be (maybe even more awesome than I anticipated). Everything I ever dreamed of doing with a smartphone I can now do--or, at least, will be able to do once I figure out how to do it. There is a learning curve, but it's an enjoyable one.

I'm going to write a slew of blog posts about my experience with my new phone, which I have christened Noether, after Emmy Noether (I like to name my devices after mathematicians--my USB thumb drive is called Leibniz). For now, let me talk about my impressions of the hardware, at least as I have experienced its performance thus far. Keep in mind that I have never had a smartphone before, so I'm still at the "gee golly this is awesome" phase of my experience.

The Galaxy S has a 10.16 cm screen with an 800x480 pixel display. It is a very nice touchscreen interface. The whole front of the phone is flat and covered by the capacitive surface, which makes it look slick and makes the whole screen easy to wipe (because touchscreen, especially now that I'm using the Swype keyboard, means smudges). The resolution is great. I've watched several short YouTube videos with it, and the contrast and tones look as good--or better--than my computer monitor. It helps that the phone also automatically adjusts the screen brightness.

I haven't done too much reading with it yet, though I have loaded WordPlayer and used it to transfer several eBooks from my Calibre library. Reading blog posts, tweets, or web pages is fine. Contrary to some people's complaints, I don't find the backlit screen annoying, and I suspect the most limiting factor when it comes to reading with Noether will be the insane amount of scrolling required. So we'll see.

If its video capability impresses, audio capability of the Galaxy S does not. The sound quality from the media speaker is poorer than I expected (call quality is fine though). But this isn't, for me, a big deal--I don't really intend to use my phone for playing music aloud in a room. That would, after all, drain my battery.

On that note, battery life is about what I've been told to expect from a WiFi-enabled smartphone. I was surprised at how quickly it went from fully-charged to 23% just on standby, with WiFi disabled because I was at school. But I won't really know how significant an issue this is until I've developed usage patterns. Then I'll be able to gauge how often I need to charge it. Just having a USB charger that works with an AC adapter or plugs into my computer is a new thing for me.

The camera, from what little I've used it so far, works great. It really emphasizes the fact that megapixels are not the best way to measure camera quality. It is "only" 5 MP. Brightness and contrast control is more of an issue here, since unlike a dedicated camera, the Galaxy S has a limited ability to compensate for various lighting levels. Here's a photo of my cats on my reading chair--and this is just an amateur snapshot, so I'm sure my ability to use the camera and to take better photos will only improve. 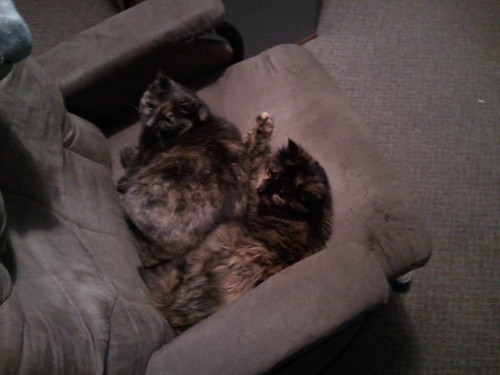 I want to talk about two things when it comes to the Galaxy S software: the default apps and the input methods. Samsung has seen fit to load my phone with various default apps that range from useful to annoying. It is nice to have a Gmail client out of the box--not that I expected otherwise, since it is a Google Android phone. Samsung has seen fit to replace the default Android Contacts app with its own homespun version, and as you might guess from this turn of events, the replacement app sucks. Organizing my contacts is a huge pain, because I can't control syncing with my Google accounts on a group-by-group basis; indeed, the phone doesn't even recognize the labels attached to each contact as groups. I hear this has been fixed in Froyo, but I don't know when I'll be able to get that.

Likewise, Samsung decided to replace the Android keyboard with its own keyboard (or "keypad" if you like, since it is a touchscreen keyboard and not a physical device). At first I had no problems with this, because I didn't know what I was missing, and the Samsung keyboard worked fine. However, as soon as I started looking for ways to insert special characters, such as letters with accent, I was stuck. Apparently the Android keyboard--at least on most devices--presents accented characters when one long-presses on a letter. That behaviour makes sense. Samsung keyboard? Not so much. Fortunately, my phone also comes pre-loaded with Swype. It exhibits the special-characters behaviour just described.

Now, I was hesitant about using Swype at first. The interface is unusual for all of us who were trained to touch-type in elementary school: instead of tapping each letter, you start with the first letter of a word and drag a continuous path that goes through each subsequent letter (hence the name "swipe"). Swype then uses the magic of software to determine which word you were spelling, and if it isn't sure, it presents some alternatives to you. It also does automatic capitalization and spacing and whatnot. Plus, if you really want, you can just use it like an ordinary keyboard (and type in words unfamiliar to Swype).

My first reaction was "hmm, that's odd, but kind of cool." My second reaction was: "holy wow, this is so much nicer to use in portrait mode than the default keyboard." In portrait mode, the keys are thinner, which makes touch-typing impossible and hunting-and-pecking frustrating. I tended to just flip to landscape mode unless I was entering a very short phrase. Swype makes portrait-mode keyboard entry painless. However, the touch-typist in me is still kind of leery about this whole "rub your finger against the screen to type" school of thought. Not only does it cause yet more smudging, but it feels weird. And it goes to show how trained I've been when it comes to touch-typing (which I am doing now as I type this post) that any other mode of keyboard entry just feels wrong, anathema, to the very core of my being.

Finally, let me close with a reflection on the truly amazing nature of the technology that we put into our devices these days. It is easy to write off smartphones as "Internet-enabled phones" and view them as a bagatelle. As somebody who didn't have a smartphone until recently, I tended to take that perspective (when I wasn't busy complaining about how much I want one). With the obsession over touchscreen technology and voice-activated features (which are noticeably absent from my Eclair-powered phone), it is easy to overlook some of the cooler ways in which our smartphones make our mobile experience that much better.

Yes, I'm talking about you, accelerometer, and you, gyroscope. I never gave you guys any credit until I realized how much you do for me. Sure, you tell my phone when I want it in landscape mode instead of portrait. But that's expected. What I didn't expect was how, when I'm on a call, you tell my phone to turn the screen off when I bring it up to my ear and turn it back on when I bring it down so I can enter on the dialpad or otherwise use the phone. This is a very minor but useful trick, and I'm grateful some developers and user interface designers somewhere decided to include it.

So there you have it: my first smartphone, and my first impressions thereof. Tune in next time for thoughts on Android, apps, and being constantly connected.