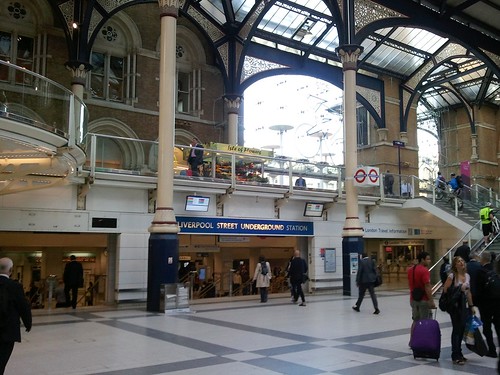 On Wednesday, I woke up at 4 am, considerably earlier than I am accustomed to doing. I had to catch the 5:30 train to Stowmarket, and from there I took the train to London Liverpool Station. After pausing to gawk at the size of it all, not to mention the number of people, I rode the tube to London Euston station. From there, it was a short walk to the building where Engage Education was holding our induction day. This consisted of several hour-long sessions during which two guest speakers presented about teaching in the UK. Much of the information was familiar to me as a recent graduate from the Faculty of Education. Some of it, particularly the information pertaining to UK-specific details, like being a form tutor, was quite useful.

After the last session, we hung around the venue for another hour and a half or so as people completed paperwork. It was only about 4:30, but Engage started happy hour a little early, and alcoholic beverages were served. Then at 6 we relocated to a bar around the corner, and most people stayed there until around 10 or 11. Thus went the “social” portion of the night, and I think most people enjoyed themselves. I was a little bored—being the only sobre person in a bar full of buzzed-to-drunk people definitely has its fun moments, but it can also be frustrating. I was keen on leaving the bar and finding a place with actual dancing, but I wasn’t quite up to the task of herding drunk people. With no clear destination in mind, we started walking and didn’t really arrive anywhere. Some people decided to get into a cab and go to a specific place; the rest of us decided to cut our losses and return to the hostel, one group by way of Subway and the other directly.

Fortunately, at the hostel bar I found the opportunity to dance that I had been seeking! So the night was not a total loss, and once again I had the pleasure of making an utter fool of myself in front of total strangers, all without any alcohol necessary. (Try it sometime!) I went to bed around midnight, mindful of the need to get up early enough to catch my ride back to Bury—and apprehensive about sleeping in a hostel for the first time.

As for this hostel: we stayed at The Generator, in a private room for four people. (There were only three of us in the room, though.) The hostel itself was nice, definitely well-maintained and marketed toward the hip, youthful traveller. Unlike my room here in Bury, where I have been sleeping through the night with no discernible effects of jet lag, I didn’t sleep very well in my room at the hostel. I was in the top tier of a bunk bed, which is odd enough, and it wasn’t all that comfortable. But it sufficed for a single night, and after a singularly unimpressive breakfast in the morning, we squeezed into large vans for the journey back to Suffolk and Norfolk.

From my brief time in London, I have to say my instincts were right: I would not enjoy living there. I’m sure it’s great if you enjoy large cities, but I really like the more sedate attitude in Bury St Edmunds. That being said, my brief time there was positive. This was my first time reading a subway all by myself (I’m a big boy now). When I wasn’t certain if I was on the right platform, I asked someone else waiting for the subway, and he was very nice about confirming I was in the right place.

So far England has been very accommodating when it comes to answering these sort of inquiries. The same day I returned to Bury, I went shopping at ASDA for some baking ingredients and ended up roping two employees into finding molasses for me. Apparently it’s called treacle over here (and now I know what treacle is, no thanks to Lewis Carroll). I had acquired a SIM card for my phone a few hours earlier, though I was having problems getting mobile data working, so rather than Google I texted Jodie and asked for some help. The moment I said “treacle” to the employees, their confusion transformed into recognition, and they pointed me in the right direction.

I think I’ll leave it at that for now. Hopefully tomorrow I’ll have time to share my thoughts on shopping for bow ties, finding a SIM card, and, of course, Doctor Who.

← Cows of Cambridge, or, Vegetable steamers need to diet

Who’s running the Asylum (of the Daleks)? →