Day three in England, and I officially have cookware!

I’m sitting here watching a season 3 episode of Buffy, streaming it from my laptop’s external hard drive to my tablet, which is connected to the TV via a micro-HDMI cable. It’s fun! There wasn’t anything attractive on TV this hour—which was not the case earlier this afternoon. At one point, three different channels were showing reruns of Buffy, Doctor Who, and Star Trek: The Next Generation. It’s common to see some TNG up against Voyager. I watched some Farscape this morning and quite enjoyed it. The abundance of science fiction on British television is definitely a plus.

I spent more time in front of the television than I would like today, but I spent the rest of it out walking, and we also walked a considerable distance yesterday, when we went to Cambridge. Jodie had some viewings scheduled for places that she could rent with her husband, Ian, and two other teachers who are coming over from Canada. We took the train from Bury to Cambridge, which was easy and pleasant, and then a cab to the first viewing. From there, we walked to the second viewing, then we got fish and chips for lunch and sat next to the River Cam. After lunch, we set off for the final destination—but we got a little lost, and little confused regarding the address. To make a long story short, we walked a lot yesterday.

But Cambridge is cool! I didn’t get to see the university campus—I’d like to, especially if there are any mathematics- or Newton-related sites of interest open to the public. There are more than the quota of churches, however—even a nifty little leper chapel—and we even saw random cows! 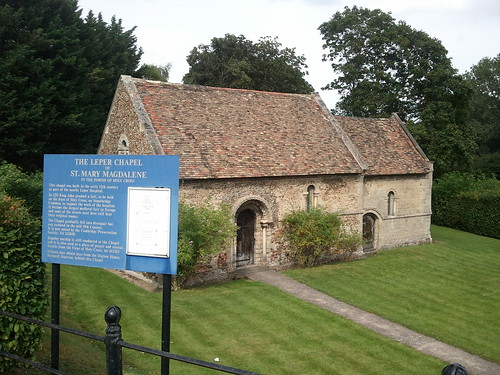 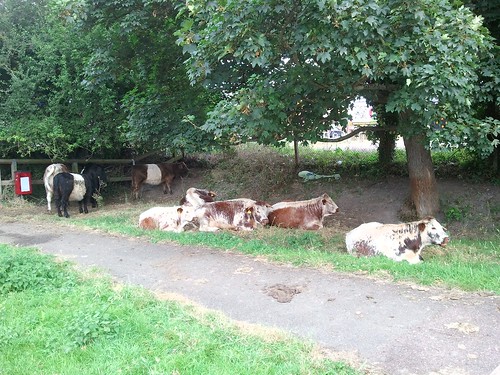 Today, Jodie returned to Cambridge for her accommodations quest (and she did considerably more walking than me today). Rather than joining her this time, I elected to stay at the house. But I had plans of my own: I was on a quest for cookware. And other things.

My roommate, Matt, is very nice. I don’t anticipate having any problems living here. However, he doesn’t quite cook as much as I do, a habit I blame my dad for inculcating in me. Thanks to his useful recipes and advice, not to mention his well-stocked kitchen, I’ve been spoiled in the food department. We have frying pans, and we have a few small pots, but they lack lids. So I set off to ASDA this morning to get myself a set of pots, a larger circular pot for pasta and sauces, and some other particulars. Later that afternoon I went to Palmer’s, a kind of home and housewares store, with slightly more expensive but better quality equipment. There I purchased a casserole dish and a vegetable steamer.

When I got home, though, I realized the steamer didn’t fit into any of my pots. I had opted for the larger of two steamers available, and I had made the wrong choice. It wasn’t like I needed to steam vegetables tonight—I had some leftover salad in the fridge, or could easily have made more—but I wanted to, damn it! So I walked back to the store—which took about fifteen minutes—and exchanged the steamer for its smaller counterpart with no issue. Then I walked back and proceeded to sort out other important cooking matters, like discerning that the oven temperature scale is in centigrade, not Fahrenheit.

But, hey, at least I know I can make it to the town centre and back on my own without getting lost!

Dinner turned out well, by the way: pork chops, pasta, and vegetables, almost just like at home. I’m still not accustomed to the idiosyncrasies of this oven and stove, so the veggies were slightly mushier than I’d like, and the outside of the pork was a little more singed than I’d prefer—though it was juicy and tasty throughout. I used “green pesto” on the pasta, because I couldn’t find straight-up “basil pesto” at ASDA … it has basil in it, but it also has a bunch of other things that make it taste slightly different, and it isn’t as oil. It’s all right, but I’m used to the stuff from home. 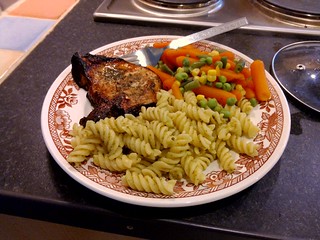 And I do miss home, but I also have a lot of time to dwell on that right now. I’m looking forward to beginning work, because then I’m sure I won’t have much time to miss home! And Christmas isn’t all that far away. I want a pony! (I don’t want a pony.)

I’d try to characterize tomorrow as a lazy Saturday, but that is a lie. If it isn’t pouring rain (and this is England), I’m going to trek down to the older part of the town centre. There’s a market there every Wednesday and Saturday, so I want to check out the produce and other things available. I’ll be in London next Wednesday for the induction day with Engage Education, so I won’t have a chance to check it out until next Saturday if I don’t go tomorrow.

I also need to finish the book I’m reading. I started it on the flight, but it is slightly unconventional in its style, so that always makes me read more slowly. I want to get back into my reading & reviewing (R&R!) groove. I also want to do some more coding. I’ve been working on a brand new, completely rewritten blog software to succeed what I’m using now (which lacks any good spam protection and seems to be the target of a lot of spam lately, for reasons I can’t comprehend).

Life in England: the London edition →