Two days after I got back from England, we took our cat Kaylee into the vet in the evening. I had noticed something was off—she seemed jaundiced, and when she started having trouble balancing, I knew there was a problem.

The following Thursday, we received the news: Kaylee had cancer, in the liver, and it wasn’t going to get better.

We said goodbye on Saturday.

Unlike Marble’s decline, Kaylee’s was sudden and unexpected. She had slowed down in her elder years, but she seemed perfectly healthy: sleeping in her chair, walking around the house like she was vaguely dissatisfied with the world, sleeping under the bookshelf, walking around my room like she was specifically dissatisfied with me, and sleeping in her chair. I loved Kaylee because she was effortlessly adorable. She lacked the frenetic energy of a kitten but had that aloofness of an adult cat down. After Marble’s death, I took solace in the hope in that Kaylee would be around for a long time. Now another part of my childhood has slipped away from me, just as I seem to be preparing to uproot myself entirely.

We still have Sarah, our rambunctious newest addition to the family. She remains energetic and unpredictable, racing from one room to another and swiping at anything that so much as twitches while in her field of view. As I write this, she is curled up in Kaylee’s chair, having inherited it and declared her intention to keep it warm in Kaylee’s stead. I have managed to love Sarah with the same fervour and IQ-dropping abandonment as I did Marble and Kaylee. I love her for different reasons—different habits and quirks of personality. But it helps, you know?

Bye, Kaylee. I will miss you. But thank you for being such a great cat for as long as you were. 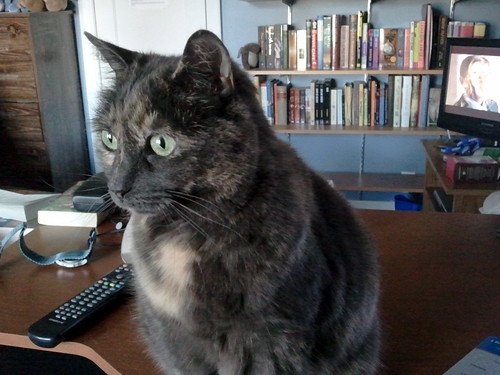 Dusting off the Dell →