Katie, a friend I have made among my class of teacher candidates, is an avid knitter. (Her teachables also happen to be the same as mine—math and English—how cool is that?) Eventually our conversations about her knitting culminated in an offer to teach me how to knit. I was not digging for this—the thought had honestly never crossed my mind. I used to do some very basic cross-stitching, but my ability to do things with my hands (aside from typing) has always been minimal. Knitting seemed like a daunting skill to learn.

So I said yes, of course. I had an ample supply of yarn left over from my cross-stitching days. When Katie returned to Thunder Bay after the Christmas break, we went shopping for a perfect set of needles and searching for a perfect beginning pattern. We eventually decided upon this hat pattern, which has the advantage of being knit flat and being done entirely in knit stitch (no purling). Another professional year friend, Hélène, deterred me from starting with a scarf: as she put it, a scarf is long and boring and repetitive; I needed a beginning project that was easy enough to complete but challenging enough that I could use it as a scaffold for improving my technique. 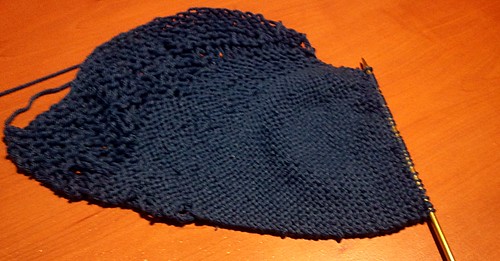 The hat did, in fact, turn out to be a good project. Knitting was not as difficult as I feared it would be. Once Katie explained the basics, I got the hang of the motions pretty quickly. “Follow the pattern” essentially means “follow the algorithm”, something we mathematicians are rather good at doing. Aside from the spectres of losing count or dropping stitches, it transformed into an endurance sport. In this sense, knitting is an art that is different for every knitter: beginners like me are little more than human looms, injecting little originality or creativity into our pieces; more advanced knitters, however, have the understanding and skill to create things that are baffling, amazing, and marvelous. I don’t know if I’ve enough talent to ever get to quite such a stage, but I’m sure that with enough practice I can become fairly competent—I might even start improvising a little!

But let’s not get too carried away. With much diligence on my part, not to mention the assistance of Katie and Hélène, and I managed to finish my hat. You can see all the details on the project’s Ravelry page. My hat definitely has that “first project” feel to it: lopsided and uneven because of my varying tension, a little too small because I haven’t yet learned how to judge and adapt a pattern to my needs. Katie has dubbed it a “sarcasm hat”. I think I’ll make another soon.

My next project is a tissue box cover. The pattern represents a good step up in difficulty for me: it involves purling and some slightly more complicated instructions; plus, I need to size it to my tissue box and yarn! I started it on Thursday, and yesterday Hélène showed me how to improve the way I hold my needles so as to help with my tension and speed. Much like knitting, purling is not as difficult as the dramatic music that accompanies the term always made it seem.

Oddly enough, knitting has opened up an interesting dimension in my social life: apparently many of my friends are secret knitters (or crocheters) in disguise! I had known about a few of them, but others are a surprise. When I went to meet Aaron, Jessica, Rachael, and Tim—my friends from my summers of math research—it turned into an impromptu knitting/crochet circle. Aaron and Jessica were crocheting while Rachael and I were knitting; Tim had obviously missed the memo about the cool new activity on campus, so Rachael provided an extra crochet hook, and Aaron taught him the basics.

Finally, knitting gives me something to do while watching TV. I can read for hours at a time, but I find it difficult to watch an entire movie all the way through. I suppose the medium just doesn’t occupy my mind enough, and I feel like I need to be doing something. Knitting gives my hands something to do and demands enough concentration to keep me focused while not so much that I can’t pay attention to the movie. By the same token, I can knit around others when we are having lunch or something, and it makes me seem slightly less rude and asocial! Plus, knitting in public is badass.

I will certainly blog more about knitting in the future. Until then, however, just as you can go to my Goodreads page to stalk my reading, you can find my knitting on Ravelry. Katie and Jessica urged me to join this site. As a newbie knitter I am finding it very useful, and as a programmer the way it is designed and functions is impressive. Once again, the Internet adds a dimension to an offline skill and makes it that much more awesome.

Sailing off the edge →