This post was published 10 years ago. Some of its information or my opinions might be out of date.

My practicum is over.

But you might not have known it had even started. I kept meaning to blog about my experiences in my “professional year”, and then when my practicum began, about that. Yet I never got around to it. This has been my busiest year in long memory, and my practicum kept me busier than ever. So hopefully a short recap will suffice.

First, professional year—the first nine weeks. I enjoyed most of my classes. There was a lot more reading and many more assignments than I was used to in my previous years, which mostly consisted of weekly math assignments and the occasional essay. But my classes have raised important issues I need to consider as a teacher, and they have prepared me well for teaching. (I still hate group work.)

Now, the practicum. I was lucky with my assignment. I went to a local high school, to the math department. In fact, my associate teacher was the same teacher in whose classroom my group had taught a “mini-lesson” for my math instruction course. So I had already met her, and she had already seen me teach (sort of). This reduced my trepidation as I went into the placement.

My associate teaches two classes of Grade 12 University Preparation Advanced Functions, and one Grade 9 Applied mathematics class. I took over one of the Grade 12 classes at the end of my first week—they were beginning a new unit, and I felt ready. The other Grade 12 class followed in the third week, and I began teaching the Grade 9 class at the end of last week. The subject matter of the Grade 12 classes is definitely closer to my heart; I got to teach both rational functions and trig functions! Both grades presented challenges, though—Grade 12s are not necessarily as mature and independent as I had remembered from my own time in high school, so you can imagine the handful that a Grade 9 Applied classroom might be.

That being said, I had an excellent time. There were no serious issues in my placement, no moments when I said, “What the hell am I doing here?” It was difficult at times, just because of the amount of work involved—planning is so exhausting—but the good far outweighed any of the bad. Perhaps the most challenging aspect of my placement was simply confronting hard truths about being a teacher—the fact that there are times when you do everything possible to help a student succeed, and it’s still not enough. I’m not necessarily a brash idealist, but I’m still young enough and inexperienced enough to have a certain kind of naive optimism that will no doubt temper itself with time.

And of course, there were times when I felt like there is no other place I can be but in a classroom. There were students who were wonderful, who were enthusiastic or simply so earnest in their attempts to learn and expand their knowledge. It’s neither realistic nor productive to require one’s students to love math … I merely need them willing to be there and to listen; we will work from that. And I can’t say I reached everyone, or that I even reached most of them—for all I know, most of them are glad I’m gone! But I’d like to think I made many positive contributions.

Oh, and one student even made me a card! Before I show it to you, however, you need a little context. At the end of a lesson on graphing the trigonometric functions, I put this image on the homework slide:

This is a riff on the “Not sure if…” meme using Fry, from Futurama. I made it myself! Those of you familiar with your trigonometric functions will recognize the humour, of course. For those who don’t, I’ll ruin it with an explanation: owing to its symmetry, cos(x) = cos(-x).

Anyway, now you’ll understand why the student’s card looks like this: 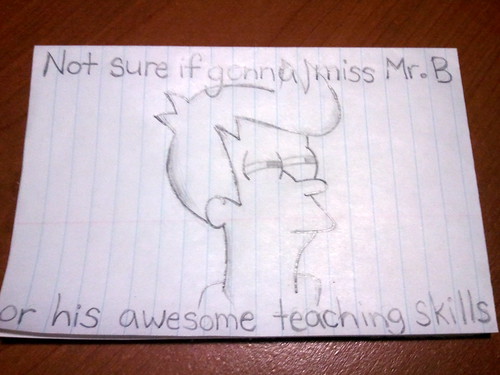 That’s the outside, and here is the inside: 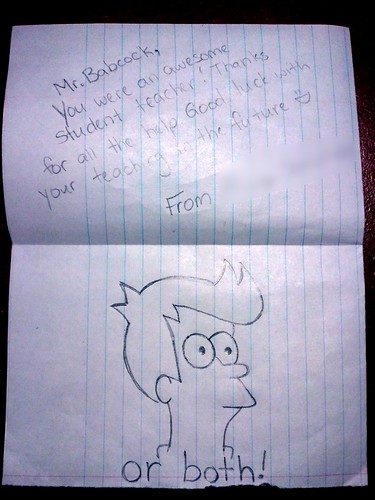 I can’t believe the time went so fast. I enjoyed it, and I learned so much, both from what I did and from observing my associate and listening to her feedback. I’ve wanted to be a teacher for a long time—almost as long as I can remember—and after my first student teaching practicum, I’m finally starting to feel like one. Or maybe it’s just the tea talking….

And now I get three weeks off. One week to relax and do Christmas shopping, two weeks to work on those papers I have due in January! Good times.

Learning to look past my privilege and listen

I keep meaning to write a more general post about my experience in professional year, but other things always seem to be happening. Such a post will happen eventually. Or maybe it won’t, and I’ll look back at this blog three years from now and wonder what I thought about…

More on math from Margaret: Arithmetic should be boring

Once again Margaret Wente, my favourite Globe and Mail columnist, has delved into the gritty underworld of math education to expose the truth. This time she is concerned that we’re not teaching basic arithmetic in schools any more. She takes issue with recent trends in math education, which emphasize discovery-based…