This post was published 13 years ago. Some of its information or my opinions might be out of date.

More Reasons to Love the Guild

I've already preached my love for The Guild, a webseries by talented comedians and actors, including Felicia Day. Well, even as they work on a third season, they've released a fantastic music video:

Who Said Math Can't Be Fun?

Well you were wrong, whoever you were. Mathematicians from Carleton University and the University of Ottawa modelled different responses to a zombie apocalypse and concluded that the best way to survive a short-term zombie apocalypse is to impulsively eradicate all zombies. Ladies and gentlemen, load your engines and start your shotguns. 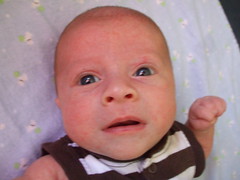 In July, my sister, Tara, gave birth to a very little boy named Clark! So I've got a nephew, which makes me an uncle, and that is sublime. I got to meet Clark today for the first time, which called for the typical point-and-shoot photos that wind up on Flickr somehow.((I blame the gnomes, if only because they haven't unionized yet like the orcs did.)) If I'm short on words about Clark, it's only because I don't really know him yet--he doesn't know himself yet, since he's only a month old and still new to the world. I will report back in four or five years!

Major spoilers ahead. Torchwood Day Two was even better than Day One, and so far Day Three has topped both of those combined. Davies successfully manages to raise the stakes in each successive episode, which can only mean a massive climax on Friday night. I can't wait! Day Two was…

The war drums are sounding once again, and another election looms. The Liberals, led by the accomplished but detached Michael Ignatieff, are channelling Twisted Sister and are calling Prime Minister Harper out. But Harper says that Canadians don't want an election. So what? I don't want to take yucky-tasting…