This post was published 14 years ago. Some of its information or my opinions might be out of date. 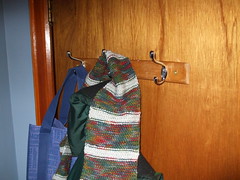 We all have humbling experiences that remind us we aren't as smart as we think we are. And even if we are that smart, sometimes we still lack common sense, and other times we just plain don't think.

A couple of days ago, I woke up to the a slow but inexorable cracking noise coming from the vicinity of my bedroom door. Sometimes my cat scratches at my door in order to gain entry, oblivious as to my current state of consciousness. This sound wasn't like a cat scratching, however, which was why I had trouble placing it at first. Unlike the frantic scrabbling noise of claw on wood, this had the deliberate sound of something going horribly, horribly wrong.

Several seconds later, the sight of the hooks on the back of my door falling out, taking my coat with them, confirmed this fear. 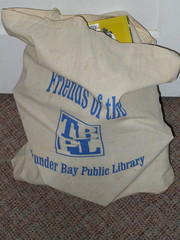 I had stupidly placed my library book bag on these hooks. When the bag is empty, this isn't a problem. Yet as I gradually fill up the bag with each book I read, it becomes heavier, adding strain to the hooks.

My brother originally installed the hooks; he was also the one who affixed them to that dandy little wooden plank. Since I'm inept at anything involving tools, I had my brother put the hooks back up. This time, I had him add anchors, which he didn't use the first time around.

Of course, I won't be putting my book bag on there ever again....

Speaking of books, here is a photo of my brand new shelving: 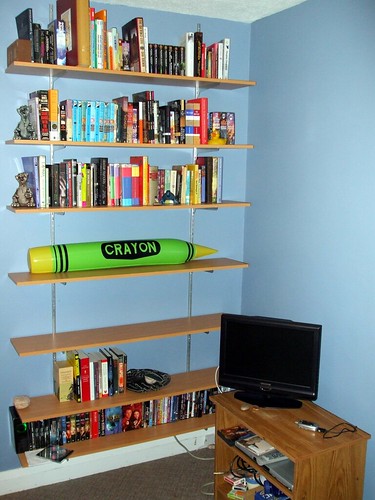 As you can see, I have much more room to grow as my book collection expands. My DVDs may soon need to usurp part of another shelf as well, unless I find an alternative storage area. The second shelf from the bottom provides a handy spot to house books I intend to read (they previously squatted on the floor and played poker while I wasn't looking). On the left are library books--currently empty, since I'm reading my last one right now--and books I've bought are on the right. A LOTR boxset--touted by Metheun publications as an "authorized Canadian edition of the heroic tale"((In the 1960s, Ace Books published unauthorized editions that subsequently made a lot of people very angry and was widely regarded as a bad move.)) separates these two categories. The boxset originally belonged to my dad, but I "borrowed" it sometime in grade five or grade six to read, and I just never gave it back. Muwahahaha. One of these days I need to repair the binding on the first volume....

But I digress! To answer the question that is burning in your mind at this point: yes, that is an inflatable crayon. I've had it for years, but never has it looked more at home than as a finishing touch on my shelves.

And that's it for this week's edition of "Ben has no common sense, but look at all his pretty books." Next week: why we don't run with power tools!((Not really. I'm not that dense. Most of the time.))

I had originally intended to eschew the "best of 2008" and "worst of 2008" trend that always appears at the end of the year.((I still intend to avoid resolutions.)) However, one of the best websites I discovered in 2008 was Goodreads. Since joining in May, I can't recommend it…

More narcissism and a little about you

Sometime between November and ... now ... it became now. I'm not quite sure when this happened, or how it happened((If you know, please do explain it to me.)) ... but it happened. Now that it's now and no longer then, that which was must become what was going to…