This post was published 6 years ago. Some of its information or my opinions might be out of date.

So, recently I blogged about my friend Cassie getting married. I gave Cassie and Marian a knitted blanket for their wedding gift (I just wanted to make sure I wasn’t spoiling this fact before I wrote this blog post!). It’s my first full-size blanket, and I am so impressed with it I’m not even going to attempt false modesty, OK? 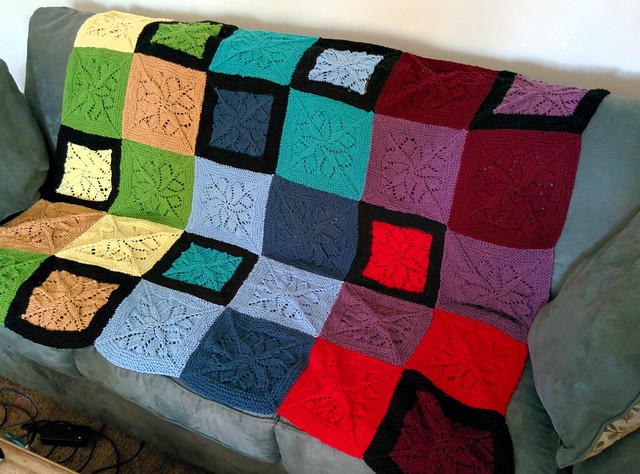 Look at that. Gorgeous.

Prior to this I knit a baby blanket, which was a much smaller and easier project. Large blankets are more of a challenge—you either need to manage a vast number of stitches on your needles, or you need to knit the blanket in smaller pieces and then sew it together. I went with the latter option. The pattern is from Tin Can Knits by Emily Wessel. It’s a square with a symmetrical, almost floral pattern that you knit in the round from the centre, spiralling outwards. You can knit it as a single colour or with a contrast colour as the border. Despite its intricate appearance, it is dead easy to do (provided you keep track of your stitch count and which row you’re on!).

I should mention one of my goals with this blanket was to use up a whole bunch of solid-coloured yarn I have lying around. Much of it is leftover from the days of yore when I had a passing interest in cross-stitch. Some of it is more recent. Though solids are useful in their place, I tend to prefer colour-changing or mixed yarns. Of course, I still ended up buying more solid-coloured yarn to finish this project … so it goes!

This was a monumental undertaking, so much so that it deserves a blog post where I can reflect on what I’ve learned during the summer I spent working on this instead of playing video games!

Tension: the T-word that every knitter, novice to expert, must grapple with. My tension is still tighter than most, I think. (Unlike most new knitters, when I first started out, my stitches were grotesquely sloppy, so I think this tension is a reaction to that.) I have improved a little—learning Continental style helped with that—but the difference in tension between my first square and my last square is … instructive.

Moreover, while the difference in appearance between my squares and the samples provided with the pattern doesn’t diminish the beauty of my blanket, it does show I have a long way to go when it comes to lacework. I’ve got some shawl patterns I’m going to try over the winter; hopefully I’ll get better at letting the holes in lace form more naturally and evenly….

This inconsistency in tension proved more problematic than it ordinarily would be, on account of having to create around 30 squares. (The final blanket is 6x5; I was aiming for 8x4, but given the random colour scheme my friend Kamila and I found a better layout this way.) Knitting is already a very repetitive endeavour—now try knitting the same pattern, literally thousands of stitches, 20 to 30 times over, and try to make sure the squares turn out the same size so you can join them together. Aaaaaaagh!

Let’s put it this way: I resorted to a lot of tricks, and am a much better knitter, as a result of working through that pain. I had to go back and unbind a bunch of squares that I bound off far too tightly, putting all those stitches back on the needles and binding them off a second time just to improve the tension. I faked it until I made it through blocking (thank you, T-pins!). I did my best to hide the worst problems while sewing the squares together. Again, it isn’t perfect and still hardly approaches the professional quality you see in some of the other renditions of this pattern on Ravelry … but I made it work!

When they were first getting to me into knitting, my friends Katie and Hélène dissuaded me from choosing a scarf as my first project. It seems like a good idea, but Hélène warned me that it would take forever to finish and feel very repetitive. This was sound advice: scarves, blankets, etc., can often (not always!) be very boring.

Now, there is nothing wrong with boring if you want boring. One reason I love knitting is that I can take it with me when I go out, and I can happily knit in social situations where reading would be considered just a little too rude. In those cases, a nice, dependable pattern like a simple scarf or hat is your friend: you don’t have to pay too much attention to it. It’s just work for your hands while your brain goes elsewhere.

Similarly, boring can still be beautiful. This is one of my favourite projects, I think, in terms of finishing it and standing back and saying, “Whoa … I made that!”

But when all is said and done, the truth is that I was not as enthusiastic about knitting this blanket as I was about other projects (and am about the projects I’m working on post-blanket). I was incredibly productive in the last two weeks of the project—because I had to finish it before the wedding! Even though I took some small satisfaction each time I finished a square, there was an equal and opposite reaction: “Oh … now I have to start the next one.”

Each time I complete a project, my choice for my next project is one of two things—either it’s intended to be a gift for someone, or I want to knit this thing or this particular pattern because I think it will challenge me in some way. I have always tried to push myself with each project, to learn something new. However, lately I’ve also been trying to revisit past patterns and knit them again. Now that I am becoming more efficient and faster at knitting, a project no longer takes a month of my time, and the idea of knitting a pattern once to test it, then again “for real” suddenly doesn’t seem so daunting.

I’m still a bad boy who doesn’t do gauge swatches though. COME AT ME, BRO.

Blankets Are a Winter Project

Seriously, don’t try sewing together blanket squares in the dog days of summer. I did a lot of the seaming outside, because the weather was gorgeous and the light was always better. But once you’re halfway through and sitting with a blanket literally on your knees, you start to get … well, hot.

Now, if I were putting this blanket together in the middle of winter, I imagine that sensation would actually be pleasant and spur me on to finish it even more quickly. So, lesson learned: next time, I’ll try to time this better in terms of seasons!

The Sky is the Limit

As I have previously reflected, knitting changed my life. Before I started knitting, I had no confidence in my ability to create things with my hands. Knitting has brought a balance to my life, which previously was rich intellectually but impoverished manually.

Nevertheless, I still have moments where I doubt my aptitude at the craft. I’m still nervous when I give knitting as a gift, even though I am happy I at least have the confidence to do this now. I’m still baffled I’m able to produce these things, that they don’t suck—and I worry that it’s all a fluke. I wonder when I’m going to hit a plateau.

This, in part, is what motivates me to keep pushing my boundaries with each new project and pattern that I try. Finishing this blanket is a huge confidence boost. It shows what I can do when I stick to a project. There were times when I was dissatisfied with what I produced, and I almost called it quits. But then I worked through it. I gritted my teeth, went back and reworked squares that weren’t good enough, and kept moving forward.

There will be patterns that stump me and stymy me. There will be projects that turn out wrong, pieces I have to scrap or frog or just generally hide away and never, ever look at again. It happens to the best of us. But I will learn from those mistakes, just as I learn from my successes.

So what’s on my radar?

Since I first wrote this blog post (publishing it was delayed because of that Snapfish thing), I have finished my first stuffed toy. But that’s another blog post.

I also want to try mathematical knitting. The mathematics of knitting fascinates me, and I am also intrigued by how knitting is so appropriate for visualizing complex shapes and topologies otherwise difficult to render. Longer-term, I’m not ruling out creating patterns of my own one day, and trying these projects will make me better at understanding how stitches work together to create shapes.

Oh, and I’ve signed up for a sweater class at my local knitting store. I could teach myself how to make a sweater (thanks, YouTube), but it seems like the kind of tricky thing that an in-person demo would help.

So, here goes nothing!

An open response to the Snapfish account deletion email

Dear Snapfish, This is an open response to your email of September 14, 2015, in which you ask me to buy something from you to keep my account open: To keep our promise of unlimited, free photo sharing and storage, we ask our customers to make at least one purchase…

When we tolerate intolerance, people die

So I came home tonight from a long night at work, only to see Twitter full up about the shooting at a Umpqua Community College in Oregon. My initial reaction was weariness—I was tired, already not in a great mood, and here there was yet another mass shooting. My second…