Right, so, I’m going back to Canada in four days. Unlike last summer, I’m not coming back after five weeks. As I have begun to pack up my life in preparation for this move, I’ve started fantasizing about all the things I’m eager to do once I’m back in Canada. But that got me thinking about all the things I’ve become accustomed to over here in the UK. There are things I’m going to miss having as part of my daily life. Not all of them are impossible to get in Canada—I could find the TV shows, for example, through legitimate or questionable means—but they aren’t as accessible or as embedded in Canadian culture.

I should also probably mention that this is a list of the little things rather than the big things. It should go without saying that I’m going to miss, for instance, my lovely landlady and her daughter, who have provided me with a comfortable and supportive home for the past year and a half. I’m going to miss my friends and colleagues from work. And because it should go without saying, it’s important enough that I’m saying it now. So, here’s a list of the little things from England that I’ll miss in Canada. It’s in no particular order.

Like most Canadians, I have vaguely patriotic and positive feelings towards the CBC. The CBC is the kind of cultural institution that Canada does well: slightly neglected but fondly recalled as something from childhood memories. They’ve got nothing on the BBC. The BBC is amazing. It churns out quality dramas and documentaries like a mad factory worker on steroids. I’ve become steeped in British history thanks to the various presenters on BBC Four, and let’s not even talk about quiz shows like Mastermind and Only Connect.

BBC Radio 2 is by far the best radio station I’ve ever listened to. Now, this in the context of living in Thunder Bay, where it seems that every radio station, no matter its intentions, is doomed to turn into a mixture of pop and classic rock within two to three years of its inception. We’ve got about four or five big stations, depending on how you count them, and they are relatively indistinguishable from each other, give or take a few degrees of genre. Plus they are awash with annoying, locally-produced ads for car dealerships and restaurants. Compared to this admittedly low bar, BBC Radio 2 is like some kind of oasis of music and taste. In particular, I’m indebted to The Chris Evans Breakfast Show for providing sunshine every morning during the drive to school. It didn’t matter how much I was dreading the day ahead: for those twenty-five minutes on the road, listening to Chris and Vassos and Lynne and the music they chose, I felt better. And sure, I could listen to Radio 2 back in Canada—but it wouldn’t be the same.

Beyond the BBC, there’s also some good stuff on Channel 4 and ITV and the others. Indeed, British TV has this wonderful phenomenon called the celebrity panel quiz show, as exemplified by QI, 8 out of 10 Cats, Mock the Week, etc. Celebrities (usually comics, some of whom seem to make a living almost exclusively from being on these shows) discuss current events, or just discuss something, in hilarious and often self-deprecating manners. And unlike the populist get-rich-or-else quiz show mentality of the United States, quiz shows in Britain actually value intelligence and character. I mentioned Only Connect and Mastermind already, but I’ll do so again. Those shows bestow a trophy (and bragging rights) on their winners—and they are insanely difficult. Beyond that, Britain seems to value its scientist and math presenters. I don’t think a show called Dara O’Briain’s School of Hard Sums would work in the United States (for multiple reasons), even on a specialized channel like Discovery. Here, it’s on one of the TV channels aimed at a general audience.

I’ve been enjoying catching up on some British TV shows I had seen in passing but never watched in full, such as The IT Crowd. This was made a lot easier by the fact that, unlike in Canada, British broadcasters have their act together when it comes to mobile/web viewing. The BBC has iPlayer, Channel 4 has 4oD, and ITV has ITV Player (albeit not a very good one). And the back catalogue of programmes they have available from these players is truly impressive. In contrast, the web and mobile players for Canadian broadcasters are a laughable confluence of region/subscriber restrictions and terribly implementation. Truly, I am humbled and ashamed. 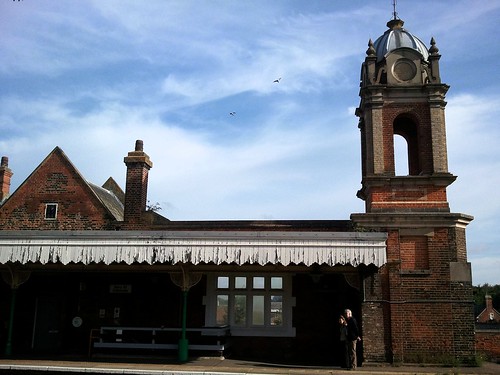 Admittedly, it’s both easier and more essential for a country that has twice the population crammed into a land area similar to Labrador, but the UK does public transportation so much better than Canada. Its bus systems work well, and as a bonus, you can actually figure out where the bus is going to take you before you board it (this is not so easily accomplished in Thunder Bay).

The true feather in the British cap of public transport, however, is the train. Now, many Britons will complain about trains. They do not always run on schedule. There seems to be interminable works, signal problems, or engineering issues. Despite all of this, I have really enjoyed all of my train journeys, and with one or two exceptions, they have always worked out well for me. Maybe it’s just because I come from a part of the world where we don’t have the privilege of taking a train. Whatever the reason, I’m going to miss riding trains. I was finally getting used to the hour-long jaunts to Norwich or even the longer stretches required to travel to London.

I certainly don’t miss having to drive practically everywhere, Thunder Bay. While I haven’t driven here in England, I’ve spent enough time in cars to come to appreciate that modern engineering convenience, the roundabout. They have crept into Canada in a few places, but Thunder Bay seems convinced that the all-way stop sign remains a civilized way of conducting traffic (it isn’t). Roundabouts seem confusing at first, but they are far superior to traffic lights or stop signs when it comes to busy intersections.

Rather than driving, I’ve done a great deal of walking to and fro. Even walking around the villages and towns here is a great experience, which brings me to … 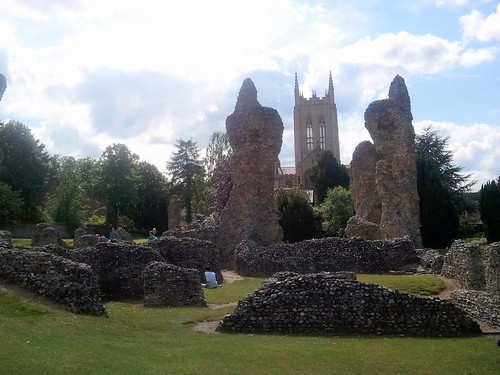 And it’s not just a model.

Seriously, you don’t understand what it’s like until you’ve done it: you’re walking through a fairly modernized, urban environment. There are shops or houses, streets busy with passing cars … and then suddenly, you turn a corner, and there is a fucking castle in the way.

It might not be a castle. It could be a church. Or even just a ruined medieval house. But there are ruins and preserved spots of history littered throughout the landscape, both rurally and within cities. Bury St Edmunds itself boasts the spectacular Abbey Gardens. In general, though, I just love the way the British have built around the ruins they’ve decided they want to keep.

The area of England I’ve come to call home has nothing in terms of its natural landscape that compares with the rugged beauty of Thunder Bay’s surroundings. But it does have a stunning array and variety of architectural marvels. From Kentwell Hall to Ely Cathedral, this area had provided a plethora of amazing tourist experiences. I’m going to miss walking down the street to a shop while knowing that, if I choose, I can easily take a detour through a centuries-old building, just for the kicks.

Doctor Who is a Cultural Thing

I’m looking forward to the premiere of the new season of Doctor Who on August 23 and breaking in a new Doctor, Peter Capaldi. I will miss the way Doctor Who in Britain has been elevated to a cultural institution.

Don’t get me wrong: there are plenty of Doctor Who fans in Canada, especially now that the new series is almost a decade into its run. I have plenty of Whovian friends. But it’s decidedly, like most fandoms, a subculture. Whereas in Britain, although not everyone watches the show, pretty much everyone is familiar with the ideas behind it. They can rattle off a string of Doctors, tell you what regeneration is, and certainly they can recognize the iconic TARDIS or Dalek from a hundred paces.

Being in Britain last year for the fiftieth anniversary was especially poignant; we happen to live at a moment where two generations have grown up with Doctor Who in their lives. The older generation knew the Doctor in his first incarnations and weathered the storm of the wilderness years during its cancellation; the newer generation is just now hiding behind the sofa from CG Daleks. Like much of its quirky entertainment, Britain is proud of Doctor Who.

Picture if you will: finding it difficult to get a job in your chosen profession near home, you elect to move to an entirely different country to start your career. Now, some of you might have actually done this. So factor in having stayed in your hometown for almost your…

I’m home. I’m sitting in my bedroom, in my slightly-too-short-for-this-desk rolling chair, a cup of tea in my big blue Eeyore mug to my right, and my fabulous bookshelves to my left. Oh, and my room is a mess. My suitcases lie on the floor in front of the bookshelves…