I sat in the backyard this morning, and much of this afternoon, and read. The weather was very nice last weekend, and it was nice again on Friday and today as well. Spring has finally crept up on us, and summer is around the corner. I’ve enjoyed a week off of school, taken the time to rest and recharge and read.

It feels so weird that as I sat in the garden, basking in the calm Sunday morning, protesters continued to occupy streets in Turkey. What began as a simple, peaceful demonstration in opposition to government plans for developing a park (into a mall) has erupted into a full-scale riot. Apparently, the Turkish government and police are rather surprised that spraying tear gas on peaceful protesters and running them over with cars isn’t quelling the riot.

I can’t quite wrap my head around that kind of massive moment. I’m thankful for the Web, particularly Twitter, for being able to provide me with moment-to-moment commentary and especially photos of what’s happening. It doesn’t make me feel connected—I don’t think I have the right to make such a claim when I have no stake in what’s happening—but it makes me feel more aware of how vast this world is.

My Twitter feed has been very interesting this week. I following a small but diverse selection of people: some of them I know, some I only admire from afar. I follow actors, writers, and random Internet acquaintances. So my feed is usually somewhat scattered in the topics that scroll down the page. The Turkey situation has appeared more and more frequently since the riots began. And last night, more than a few of the people I follow suddenly started talking about Matt Smith’s departure from Doctor Who. (For the record, I am sad to see Matt Smith go, because I liked him as the Doctor. He inspired, along with Bill Nye and my personal dislike of ties, my current bow-tie fashion.) 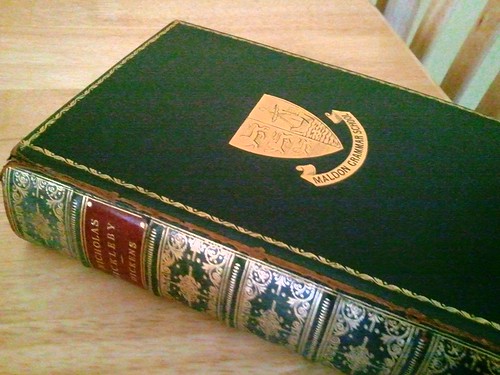 I’ve spent my weekend doing things somewhat less politically sensitive than marching on the Parliament. On Monday, my roommate, her daughter, and I went to Risby Barn. It features two barns filled with antiques and collectibles, from buttons, pins, and teacups to paintings and furniture. I salivated over several old books, and I even purchased a few volumes. I found an 1878 edition collecting some of George Eliot’s works, including Silas Marner, and an early twentieth-century edition of The Mill on the Floss—I now own three copies, two here in England. It was a good day for Dickens, too: an undated twentieth-century softcover of The Pickwick Papers, and a really neat edition of Nicholas Nickleby with a grammar school’s seal on the cover and a bookplate, dated 1937, awarding the book to a student. Wow!

Tuesday morning, I hopped on the bus and went into work for the morning. Some of our Year 11 students made the right choice and came in to do some revision on persuasive techniques and article writing. Their exam re-sit is this Tuesday—it’s their last English exam. I hope they do well.

On Thursday, we went to the West Stow Anglo Saxon Village. It wasn’t a very nice day, so the atmosphere was subdued. I enjoyed the opportunity to enter the huts in which the Saxons would have lived hundreds of years ago. By far, however, the best part of the experience was the chance to try a little archery. An instructor had an area set up, where one at a time we were allowed to try several different bows, ranging from the modern compound ones to older types. All three of us gave it a go; I was particularly interested in trying the traditional longbow. I did archery back in Grade 9 gym but never since, and I enjoyed my brief opportunity to try it again!

I visited some friends in Ely and played board games. I seized upon the opportunity to watch Primer through their Netflix account, and the movie was every bit as rewardingly complex as it was made out to be. When I returned on Friday, I went bowling with some other friends. Then, exhausted, I made my way back home in some unexpected sun, and collapsed. This week has been far too social for my liking, and I have enjoyed my quiet weekend.

By any standards, I’d say this was a successful break. I’m getting better at taking the days of books and tea, sun or storm, and enjoying the serenity instead of wasting time by worrying about what might come the day after. Books and tea—that’s all I need. And maybe a longbow. For the zombies.

This season of Doctor Who has disappointed

I just watched “The Name of the Doctor”, the finale to this season of Doctor Who. My roommate and her daughter were in London yesterday to see Phantom of the Opera, so I waited until this morning to view the finale with them—we had a bacon breakfast party.…

For the past few years I have paid for the privilege of voting in the Hugo Awards. This comes with access to a voter’s packet of digital copies of most of the nominated texts, from novels to short stories and even some of the related works. It’s much less…