Last week I got a Facebook message from my sister: “Grandma died this morning. Mom is OK. She just wanted you to know.”

My maternal grandmother was 78 years old. Her death was not a surprise but rather the conclusion to a slow decline that had begun a year prior. My grandmother had diabetes, and had coped with it for decades. Until a few years ago, she had also seemed to be reasonably healthy given her age and medical condition. Complications to her circulation, however, necessitated surgeries, which themselves caused more problems. For the past year, she had been in and out of the hospital—and when home, she was still confined to a bed. This was a trying time for my grandfather and mother (not to mention Grandma herself). Grandpa wanted Grandma to be at home, but taking care of her and meeting her needs was a daunting task. Yet constantly bouncing from hospital to home was stressful in its own way. It was a vicious and unforgiving cycle, and recently we had reached the point where no one was giving us good news. Despite the occasional days of seeming to rally, my grandmother was not going to get better in the long term, and with each passing week her decline became more obvious. We all wanted closure.

The above paragraph reads, to me, as if I have much more intimate knowledge of these events than I actually do. I was on the fringes of this activity, involved only as the concerned grandson visiting his grandmother occasionally at home or in the hospital. This was largely my relationship with Grandma. As kids we would visit my grandparents’ house and play, eat her baking, and—especially in recent years—listen to my grandfather’s enthusiastic explanations of his latest forays into computers and cameras. In my later adolescence, I made more concerted efforts to “get to know” Grandma. I asked questions about her life, and about what life in general was like when she was growing up. Aware that the world had been so different then, and that she would not always be around to provide that first-hand testimony to me, I tried to learn what I could while I had that opportunity.

This is my first death of a grandparent. In fact, it’s the first time anyone close to me has died. I’ve somehow managed to escape ever having to attend a funeral or mourn the passing of a loved one. That’s probably the strangest part of this experience: I am not all that broken up about her death itself, because we knew it was coming, and in some ways it’s a relief. Yet I have been affected more than I anticipated simply because, for the first time in my life, someone is gone.

Further complicating the situation, of course, is the fact that I’m living and working in a foreign country 6000 kilometres away. My mother has my brother, sister, and grandfather around for support. And I’m coping fine—it helps that I did manage to see my Grandma one last time while I was home for Christmas, and even if I didn’t quite expect her to die so soon after that, part of me expected that to be the last time I saw her. The idea that I never will see her again is the hardest notion to accept. People who are merely absent are still around, living their own lives, always with the potential to intersect with your own again. I think now of all the times I put off visiting my grandparents, didn’t make the time simply because I was tired or more interested in what was on a screen in front of me. Don’t get me wrong—I don’t feel incredibly guilty. But moments with loved ones, particularly those who are now elderly, are finite and fleeting. They must always be cherished.

I debated whether I wanted to say anything here. I avoided tweeting anything after I learned, because I wanted to avoid the inevitable barrage of perfunctory, “I’m so sorry for your loss” tweets and Facebook comments that would follow. (I suppose those are going to happen now, but what can I do?) But to let my Grandma’s death go by entirely unremarked here would be … strange. And I know from experience that the longer I procrastinate writing a blog post, the more its chances of ever actually happening diminish. So this is it: a 21st-century way of marking a memory, my farewell to one of only two grandmothers I will ever have. 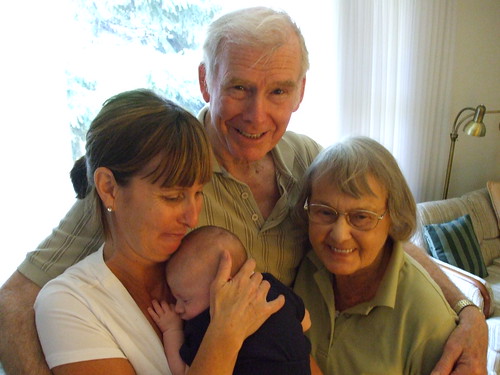 You can go home again

I’ve spent the past eleven days back home in Thunder Bay, enjoying my break and catching up with friends and family. It has been good. I have reconnected with our cats, who began merrily disassembling the Christmas tree one ornament at a time approximately an hour after we put it…

The infinite majesty of the snow day

For the last two weeks, I took the bus between Bury and Thetford to get to work, since the teacher who normally gives me a ride was off on paternity leave. The bus ride itself is pleasant and not that long (nor is it ever crowded), although the twenty-minute walk…