I was up bright and early on Sunday morning. I “enjoyed” the breakfast in the hostel bar while waiting for the other members of our intrepid expedition to filter through, “enjoy” their breakfasts, and begin to draft our plan of attack. We eventually settled on starting our day by touring Edinburgh Castle.

To say that Edinburgh Castle dominates the Edinburgh skyline is a gross understatement. The castle looms over the old town, a comforting landmark and constant reminder of the sense of history that pervades the city. It is everything one wants from a stereotypical fortification. Perched precariously atop the Castle Rock, it looks almost as if it grew from the cliff. It’s possible to walk around the outside of the castle and view the sheer cliff face along one side—our guide during the previous day’s walking tour had told us it was easy to climb if one knew the right path, but I had no desire to test that theory! Fortunately, the approach from the Royal Mile is less daunting and more paved.

Upon entering the castle (and paying the requisite admission fee), the first thing that struck me was the view. Seeing the castle from another part of the city is great—seeing the rest of the city from the castle is another experience entirely. True, it’s not as if I knew enough about Edinburgh to recognize many of the buildings. But it’s still breathtaking. It reminded me of Hillcrest Park back home at Thunder Bay, but the city below affords a much richer, wider-angled view. 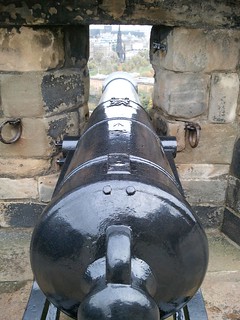 There is plenty to see inside the castle grounds, although from an external inspection it all looks rather the same. We could climb some battlements and look down the nose of some cannon. There are a few museums inside: the National War Museum, the Regimental Museum, and the Prisoners of War Museum (among its other uses, Edinburgh Castle’s dungeons housed prisoners of war throughout the seventeenth and eighteenth centuries). Some of these exhibits were fascinating and informative; others were, while interesting, a little overwhelming to a tourist trying to get through everything in a few hours. We decided to engage in some “extreme museuming” to see as much as we could. Part of me feels bad about that, but at some point, you have to decide how much time you are willing to spend dwelling upon signage and exhibits—especially when another museum or similar venue lurks just around the corner.

Perhaps the most notable cultural and historical artifacts at Edinburgh Castle are the crown jewels (or Honours of Scotland). These comprise the Crown, Sceptre, and Sword of Scotland. The crown jewels have an interesting history all their own that mirrors the fortunes of the Scottish monarchy. They went into hiding during the days under Cromwell were restored for Charles II’s coronation. After the Parliament of Scotland was dissolved by the Act of Union in 1707, the crown jewels became defunct! Locked away, neglected, and virtually forgotten, the jewels lay in wait in Edinburgh Castle for almost a century, until Sir Walter Scott retrieved them and they were put on display.

To see the jewels, we went through a very tightly-designed exhibit that includes the history of the artifacts. This was by far the most crowded part of the castle; at times it was difficult to move forward, and we had to wait for the line to advance. I would have taken photos; alas, there were signs admonishing us not to do so. Seeing the crown jewels, and the Stone of Destiny next to them, was definitely worth queuing though. 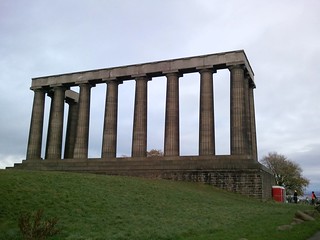 We spent over two hours wandering the castle grounds. Then we left and took our time going to lunch—we got distracted by several shops along the way. Eventually we found a pub for lunch. Then, rather than returning to the hostel right away, we decided to head to Calton Hill, which overlooks the city from the northeast. Calton Hill is easily accessible and has several fascinating monuments on it: an observatory, which we could not visit at the time; a monument to Admiral Nelson; and the unfinished, Parthenon-inspired National Monument. As with Edinburgh Castle, the view from Calton Hill is nothing short of breathtaking. It provided plenty of fodder for intriguing perspective shots and some panoramas.

We went back to the hostel and prepared for a night out on the town. For the others, this meant relaxing and pre-drinking. For me, it apparently meant learning to play euchre. No one warned me about this—I was just kind of drafted—but I didn’t mind. I picked up the rules rather quickly, surprisingly, and I enjoyed the several games I played that evening. By 10 or so, we were finally ready to leave the comfortable bosom of the hostel bar and embark on our night out. We wandered around a bit before we settled on a bar called Frankenstein’s, which had a suitably Halloween theme considering the season. The general consensus was, apparently, that we should stay at Frankenstein’s for a bit and then move on to another location—that didn’t happen. We got in, people started drinking and dancing, and we were there for the rest of the night.

For what it’s worth, I enjoyed the dancing. There was also karoke—they alternated between one, usually recent, dance song and one karoke tune. At one point, the Canadians in the room were summoned to the stage to sing along to “Call Me, Maybe” (Carly Rae Jepsen being but the latest in a long line of … talent … exported from the Great White North with suspicious haste). I even tried my hand at a rendition of “Safety Dance” by Men Without Hats. This was my first time singing karoke, and once I got the hang of projecting into the microphone, I think I was OK. I performed it as a kind of duet with Kate, the Australian/honourary Canadian in our group.

Most of us left the bar sometime before two o’clock. Conveniently, there was a pizza place open next door. It furnished us with some very late post-dancing meals that we ate on the way back to the hostel. I slept very soundly that night but was once again up early and ready for Monday’s adventures.

Being sick really throws off my routine. And I love my routine. I had planned to write one or two more posts about my Scotland trip. But I’m behind, because since last Thursday I have been ill with some kind of chest cold that has since metamorphosed into a head…

So, my students finally found me online. Seriously, what took you so long? Not to boast, but I’m easy to find online. There are few enough Ben Babcocks that my various accounts, not to mention my website, eventually show up sometime on a Google search. So I knew it was…