This is my last iday diary entry. It is short, on purpose. Only so much of interest can happen in seven-hour plane ride over the Atlantic, and this is going to be short on introspection because I’m still processing a lot about my time over there.

We awoke early for a 7 am drive to London Gatwick, a trip that took about 2 hours. This was a time of goodbyes: Jodie was staying in Bury, of course, where she lives and still works; Ian would be staying with her. Arushi was going home, but our flight was full so she was booked for the next day’s; a separate taxi drove her to a hotel in London. We bid these three farewell and hopped in the van. I took the opportunity to catch more sleep during the drive, while everyone else reminisced about the night they had.

I got to see more of Gatwick airport this time around. We queued through the check-in for Air Transat; the attendant took issue (probably rightly so) with my torn suitcase. Unfortunately, my ineptitude with any manual task meant it took me far too long to wrap tape around the bottom of it. Sorry, physical world. Give me a keyboard and a mouse and I will be more graceful.

Since we actually knew each other now and were together prior to check-in, we took the opportunity to get seats together so we wouldn’t be next to strangers the entire time. Mairwen and I ended up with the two seats in the last row of the rightmost column on the plane. Though I normally take the aisle, I ceded it to Mairwen because her body didn’t feel very enthusiastic about another 7-hour flight. I’m not ordinarily one to gawk out of the window of aircraft, but as it was in the middle of the day, I made an exception and captured some beautiful images of being above the clouds. 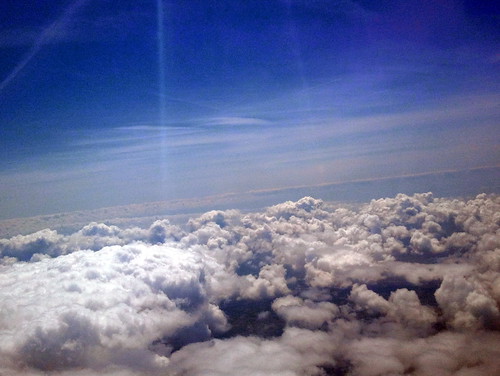 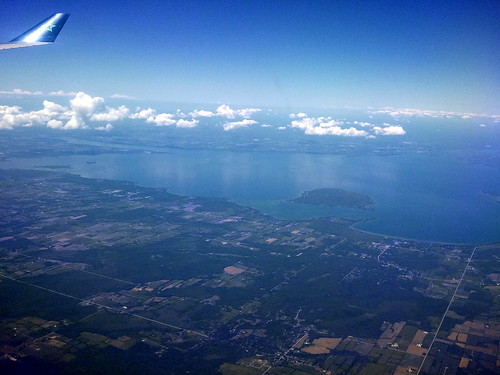 The flight was mostly uneventful. They showed Sherlock Holmes: Game of Shadows, which I didn’t feel like watching. I did watch Green Lantern and knitted for a bit. I regret it now—Green Lantern, not the knitting. I read, tried to nap but didn’t, and even taught Mairwen how to play cribbage. (Travel Cribbage app on my tablet for the win.) The plane landed early, which if Twitter is any indication is almost impossible, and we got through customs easily. After collecting our luggage, we bid farewell to each other.

Not sure if I mentioned it before, but Jenny and I actually went to high school together. We didn’t hang out much then or in university, but it was nice to have someone around not only from Lakehead but from Thunder Bay. Her flight back home was earlier than mine—she was flying Air Canada, I Westjet—so we hung out until her flight left. Alas, she had managed to slip away from the baggage claim quite quickly, and I had to track her down, leaving the relative safety of Terminal 3 for the confusing vastness of Terminal 1. Eventually I found her outside a Wolfgang Puck Express, where I ordered a burger and fries combo with a portion size that beggars belief. We took advantage of the free WiFi and chatted for the next few hours. Jenny tried to persuade me of the amazingness of The Real Housewives of Orange County and Jersey Shore, but she was having issues streaming. (I had no issues when, upon my return to Terminal 3, I whiled away another hour watching LoadingReadyRun videos.)

So I had to wait another few hours, and then my own flight left. I much preferred flying across the Atlantic during the day, just after waking up from a night’s sleep, to flying at night after a long day of travelling. Nevertheless, I was starting to feel very tired by the time the plane to Thunder Bay began boarding, and my eyelids were heavy for that entire flight. One advantage to 7–8 hour flights across the Atlantic, however, is that they make the hour and a half flight to Thunder Bay seem like nothing.

Slightly after 11—this flight too was oddly on time—we touched down in Thunder Bay. I met up with my dad, we got my luggage, and once home I collapsed into bed. Well, almost. I tweeted and checked the Internet first, of course, and had a nice, relaxing bath. Then I went to bed and slept through until 11 the next morning.

Last full day in England! This time we left very early to drive to the school I was visiting. It was one of the more distant schools, plus my driver was dropping someone else off at another school. So at 7 am we left the hotel and began the long…

I don’t always make videos, but when I do, they are long and have quirky music.