Another early day for me—this is starting to become a pattern. Breakfast at 7:30, followed by a seminar-kind of training session with a head teacher. He covered some of the terminology in the UK curriculum that we might not be familiar with, and then offered guidance for those of us who had to plan lessons in the next two hours before going out to visit schools. The school I was visiting today did not ask me to teach a lesson. In one respect I was lucky—I had plenty of time to prepare for the lesson I would teach at tomorrow’s school—but in another respect, teaching an audition lesson provides information about how students at that school might react to you as their teacher.

So I worked a bit on my lesson for Friday’s school while the morning turned to afternoon. At noon, we left the hotel and began driving up to Thetford, in Norfolk, where Taylor, Monica, and I would get a bit of a tour of Thetford Academy. Our driver hadn’t been to Thetford before, so he got somewhat lost. We didn’t complain, because this meant more charming English countryside. To complicate matters, Thetford Academy has two campuses as an artifact of being an amalgam of two schools, and we had to find the North Campus. We drove past it once, backtracking when we started seeing pigs in the fields, only to discover it was right on the main road with a massive construction project next to it (new buildings!)—I don’t know how we missed that.

The tour was interesting. My experience with schools here in Ontario has been a parade of single buildings. Thetford Academy and the other school I visited had comparable student populations but housed them in sprawling campuses more reminiscent of university. I wonder how much students (or teachers) enjoy dashing around from building to building in that much-discussed English rain…. Thetford’s North Campus is also the site of some construction, as mentioned above, to the tune of an entire new building and an impressive budget for integrated technology. (The person who gave us most of the tour was also in charge of supervising the build, so he had all the details and all the passion for it.) From what I could see of the classrooms, the technology was on par with what we have in Ontario. After using them in both placements, I’m quite attached to SMART boards, so I look forward to continuing that relationship.

After the tour, we had lunch with another teacher from Lakehead who came to work at Thetford last year. (It was just cafeteria food and not particularly good.) There were four such teachers there at the time (one of the reasons I found the school so attractive as a jop prospect) with another joining in the fall already. I actually knew the teacher we had lunch with—we were in the math program together—so she was able to give us plenty of unvarnished details about what it was like to teach in Thetford and live in nearby Norwich. These perspectives from people who know what it is like but don’t necessarily have a stake in one’s acceptance of any particular offer are invaluable.

Following lunch, the assistant principal and head of mathematics drove us to the South Campus for a brief tour there. This was the same fellow with whom I had talked at the pub last evening. Unfortunately, there were no mathematics classes running at that time, so I had to settle with sitting in and observing an English class. This was still a great experience, but I would have liked to see a math classroom as well. As it is, I watched one of the English teachers lead a lesson on Of Mice and Men (which I had never read). The structure of the lesson was similar to what one might expect in an Ontario classroom, though the goals are much more closely linked to the standardized tests the students have to complete throughout their schooling.

With the tour concluded, we said goodbye and rejoined our driver, who had good timing. I left Thetford feeling positive about the school. However, I still had one more school to see … and if I ended up getting offers from both of them, and I liked both of them, then I wasn’t sure how I would choose. 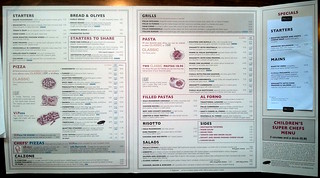 All the candidates and consultants went to dinner Thursday evening. We went to an Italian place called Prezo’s in the town centre. Very nice decor … and also very loud. Their menu was very nice … and also very confusing. It was difficult to keep one’s eye focused long enough on any one dish to decide whether to order it! I decided I didn’t want anything too heavy, so I went with a lobster and crab tortelli. It was yummy. After I finished my food, the noise was getting to me enough that I went outside for some fresh air. I sat down on some steps across the street and enjoyed the semi-quiet town atmosphere until it was time to return to the hotel. 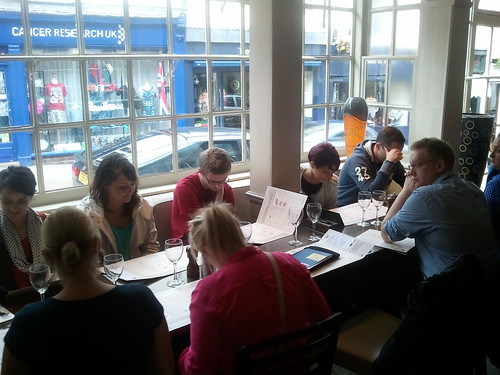 Interview day. I woke up early—I think around 5:30—to make sure I had enough time to prepare before breakfast at 6:30. In particular, I was worried about my tie, which up until now I had only practised. Now it was time for the real thing. Doing up the top button…

Last full day in England! This time we left very early to drive to the school I was visiting. It was one of the more distant schools, plus my driver was dropping someone else off at another school. So at 7 am we left the hotel and began the long…