This post was published 11 years ago. Some of its information or my opinions might be out of date.

Sunday was mostly an odds-and-ends day. I cleaned my room, organized things, and finished some books. Although the threat of rain hovered constantly in the air, I even managed to do some reading outside. So I had a pretty good weekend.

I managed to finish both Persuasion and the Iliad. My to-read shelf was finally empty, which meant I could restock it with books from the rather oppressive overflow stack. I have forty more books on the shelf now, and the overflow now fits comfortably inside that blue milk crate! My goal is to empty the shelf again by the end of July--this is ambitious, I'm aware, and made even more so by the fact that I also have to get through the Hugo Voters Packet by the end of July.

I'm voting in the Hugo Awards again this year. I first voted last year, when John Scalzi alerted his readers to the fact that the Worldcon organizers distribute a packet containing electronic copies of most of the nominated works. This year, the attending membership at Renovation is only $50. That is a small price to pay for access to all these wonderful works, not to mention the privilege of voting in the Hugos themselves. I'll blog more about the awards once I have read more of the nominees. 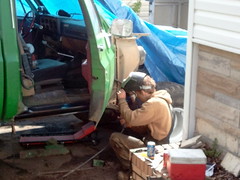 My weekend was rather relaxing, and certainly not as active as my brother's. He spent almost the entire weekend outside in our driveway, doing body work on his truck. Brad's dedication and work ethic never fail to amaze me. I'll come home from my seven hours of math research, which includes high speed Internet and tea, collapse into a chair, and declare myself exhausted. Brad, on the other hand, leaves earlier than I do, comes home later from a physically-demanding job, and goes straight to work on his truck. He's always working on his truck--and when he's not, he's helping his friends with their trucks, or going mudding. None of these activities particularly appeal to me, but I am glad I have someone around who knows how to fix my car when it breaks. Especially when he's the one who broke it!

And now I'll talk about my research for two paragraphs, which means some fairly intense math jargon. You have been warned!

This is the sixth week of my summer research. So far, it has been very similar to last year, which doesn't surprise me. I have mostly been trying new approaches to computing the spreading number by looking at the symmetry of the graph. We can perform rotations and reflections on sets of vertices using the symmetric group, and Dr. Van Tuyl and I hoped this would lead to better algorithms for finding the spreading number (which, you may recall, is the cardinality of the maximum independent set on the graphs we are studying). Alas, although we have made many valiant attempts, a feasible solution remains beyond our grasp. We have several interesting algorithms I've been testing, but they either use too much memory or do not produce tight enough lower bounds.

This week I think I am going to finish up my look at the spreading number, regroup, and redirect my efforts. I will turn again to the covering number; last year I had a fair amount of success with a greedy algorithm to find an upper bound (specifically, a minimal clique covering). Despite our lack of success in computing new bounds for the spreading number, the time I've spent so far this summer has furnished me with some new tricks that I hope to put to good use in improving this upper bound algorithm. Also, I would really like to understand why the covering number in four variables corresponds to this integer sequence.

And so my summer continues: lots of reading, plenty of math. As we now ease into June and hopefully receive more sun, I want to get more writing and more programming (mostly for this site) done as well. I'll try to keep the blog posts coming.

On the demise of Stargate Universe, or: What the hell, Syfy?

So last week, we witnessed the passing of yet another science-fiction franchise from television. Syfy broadcast the series finale of Stargate Universe on Monday, and I call it the demise of the franchise because the show's cancellation has been a death blow to the promised SG-1 and Atlantis movies as…

Stalk my reading even more intensely!

On Tuesday I launched reading portal for my site. Basically, this is a one-stop place to learn about what I am reading, what I was reading (and what I thought about it), the best and worst books I've read each year, etc. Although I've got both my current reading and…