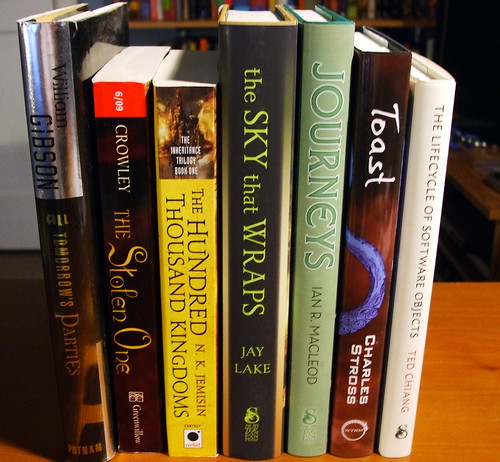 I've fallen in love with Subterranean Press, a specialty science fiction publisher. They release gorgeous limited editions of books by fantastic authors. Recently I bought an awesome special hardcover edition of Grave Peril, the fourth Dresden Files book. And a few weeks ago, I was weak-willed enough to spend money on four additional books from them!

Courtesy of BookMooch, All Tomorrow's Parties, by William Gibson, and The Stolen One, by Suzanne Crowley, arrived in the mail last week. I am slowly collecting Gibson's novels and hope to read them in some kind of order, so I probably won't get around to All Tomorrow's Parties any time soon. The Stolen One is Elizabethan-era fiction, marketed for young adults; I entered a giveaway for it on Goodreads and didn't win, but it looked interesting enough to put on my BookMooch wishlist.

One of my discussion groups on Goodreads is reading N.K. Jemisin's The Hundred Thousand Kingdoms this November. It looks like exactly the kind of fantasy I love, but I've been trying to reduce the number of books I buy until I get through my backlog. (As this post indicates, I'm failing miserably at this!) But I had to go to Chapters last week to buy a birthday book for a friend, so I used that as an excuse to acquire this book--and only this book--for myself. As soon as I entered the store, I put my hands up to either side of my head like blinders and ran for the fantasy section.

So, what about these special books from Subterranean Press? Well, we've got: