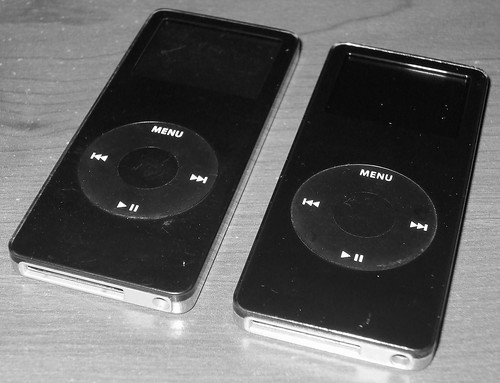 No, what you see above is not the result of an evil exercise in cloning first generation iPod nanos. I do indeed have two. Here's why.

Last week after I arrived home from work, I dropped my iPod. It landed butter-side-down on the asphalt driveway with a dull, unassuming thud. Immediate inspection revealed no damage to the exterior, but when I turned it on, only the bottm left quadrant of the screen was working. I had broken my iPod.

This was my first MP3 player, bought in the summer of 2006 for the 20-minute bike ride to and from work. Sure, it's only got a gigabyte of storage, but that has always been enough for me. Even as newer models came (and went), I stuck firm to a resolution that I would not upgrade until my iPod itself would no longer do what it was designed to do: play music.

A broken screen did stop my iPod from playing music, incidentally, and at first I thought that was the extent of the damage. Although this was inconvenient--I could no longer see how much of the battery remained, for instance, and selecting songs became an art instead of a science--it still played music, and that's what I needed it to do.

The fall must have damaged to the battery as well, because I charged it up that night, and when I turned it on in the morning, it gave me a "very low battery" warning and shut off. Since it refused to hold a charge, I had no choice but to declare my iPod nano dead.

So then I had a dilemma. What do I buy to replace it? There's a myriad of MP3 players on the market, and although I'm a tech-savvy person, most of them are close enough in terms of features that it's so very hard to make a useful comparison. It mostly came down to price: aside from the shuffle (which has no screen), the new iPods start at $150. There were some other brands that cost half as much, but I still wondered if they cost too much. In the end, my decision didn't come down to price so much as features--and not the features I wanted, but the ones I didn't want.

Imagine my surprise upon learning that the latest iPod nanos (fifth generation!) have cameras in them. Now, I have nothing against putting a camera in a device. That's great. But I don't really need to pay the extra money for an MP3 player with a camera when I can get a comparable one without a camera for a little less. Come to think of it, I really don't need anything from the MP3 player except for it to play music and have a screen so I can select songs. What I really wanted was my first generation iPod nano.

So I got one. I went on eBay and easily found an auction for an iPod identical to mine--only it was 2 GB instead of one. So it's an upgrade! It cost me $37 with the shipping (my original 1 GB iPod nano cost me over $200). It arrived today, so I snapped a photo of my two iPods together. I love continuity--in fact, I crave it. I would have kept my old iPod for as long as it kept going, and I'm a little frustrated I lost it to something as incidental as a fall. It has served me well, and even though I have a new one that is identical . . . I still miss it.

Sure, it's not the newest model, and it doesn't have umpteen gigabytes of space. That's fine for me though. Unlike a mobile phone or computer, I don't need any new features in my MP3 player. I want it to play music. The extra space, compared to my old one, is nice too. But it's the comfort this continuity brings (and at a fraction of the price of the original) that matters. My first generation iPod nano is dead.

Game Over: Would you like to play again? How Conservatives and copyright broke my spirit →