Apparently I'm a blue person. My old room was a horrendously light shade of blue, so I painted it a darker blue. It turned out too dark, however; this time around, I chose a better shade of blue--more blue grey, slightly lighter. My coworkers at the art gallery suggested doing three walls in a natural brown and having a blue accent wall, but I was too timid to follow up on this recommendation; I stuck with blue.

What was originally a one-man operation became a one-man-and-twins operation when my friends Cassie and Carly offered to help paint. I didn't even have to ask!((Of course, buying them each an xkcd t-shirt for Christmas might have had something to do with it.)) I woke up early that morning and moved most of my furniture out of my room. Then I washed the three walls without wallpaper before tackling that last, fatal wall. 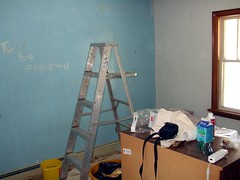 Removing the wallpaper was tedious but not difficult. The surface vinyl came off easily, and the commercial wallpaper remover worked as advertised on the adhesive. It wasn't difficult so much as a time-consuming, foamy mess. I finished shortly after 1 o'clock, and then Cassie and Carly arrived in time to begin painting. After stripping off the wallpaper, I learned that the wall underneath was a light blue, and that the previous occupants of the house had decided to remind themselves it would be wallpapered. Although removing the wallpaper went better than I anticipated, I'm still never putting up wallpaper myself--it seems like an irresponsible undertaking, and I don't want to inflict that sort of pain on another human being.

It went much faster with three people painting. I couldn't imagine having to do it all by myself--it defintely would have taken me two days. As it was, we finished the first coat by four o'clock, then we took a break to watch an episode of jPod while the paint dried. Then we put did a quick second coat before my friends had to go--leaving me with lots of clean-up!

Here's a before/after panel of my old and new room:

I'm going to put my shelves back up, of course. I pushed the TV stand against the other wall because I plan to put up floor-to-ceiling shelving where I only had three shelves before. Hopefully this should accommodate my growing book collection.

← Online/Offline is a false dichotomy