This post was published 16 years ago. Some of its information or my opinions might be out of date.

No, I didn't go to Rock the Fort this year (you American people of course have no idea what I'm talking about, let alone you poor people in Britain, Singapore, Ireland, India, etc., but bear with me). However, today my friend Laura and I did take a trip out to Old Fort William Historical Park to take a tour and have some fun (and to laugh at our friends who were working out there).

For those of you who don't know, Fort William was the largest fur trading fort west of Montreal and was essentially the "bottleneck" for furs coming eastward from the interior of the country. Back in the nineteenth century, this is why people settled here. The Historical Park, rebuilt to detail after the original Fort burned down, attempts to bring that atmosphere alive with costumed guides who play the roles of all sorts of people there, including the famous voyageurs.

Several of my friends work there, including Graham and Cortney, so Laura and I agreed that it would be cool to spend the day down there and take a guided tour and see if we could locate our friends. Unfortunately, that was easier said than done. Once we paid at the Visitor Centre for admission, we sort of got...lost. :r I blame it on the maps; they really weren't that nice and accurate, so how were we supposed to know which way to go? Anyway, we spent a full ten minutes wandering aimlessly and ended up all the way behind the fort, where a kindly costumed fellow supervising some day campers pointed us in the right direction of the main gate. Once there, we waited a bit more and then the tour started. 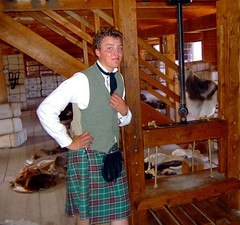 Our tour took us around a bunch of the fort, although not all of it. We got to learn a lot about the history of the fort, the fur trade, etc. It was really very fascinating and brought back a lot of memories of grade eight history (when we first learned this). After the initial tour ended, Laura and I left and ran into one of her friends. Then we ran into Graham, a fellow of Scottish descent who proudly plays the bagpipes and wears a kilt. He pointed us in the direction of another friend, Cortney, who gets to play a voyageur's wife (which is really a tough life indeed). 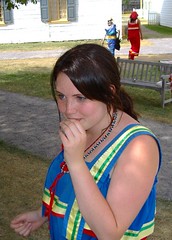 Cortney was in the process of giving another tour, so Laura and I tagged along. She took us to different places than the other guide; we got to see the hospital, kitchens (from which I tried a bit of hardtack). We went to the shops to see what the latest fashions were (apparently my shorts were out of style at the time and leggings were in). Then we went out to join in some singing and dancing.

We sang and danced (some of which I got on video :shifty:) until it was virtually closing time. It was a great time, nice to see my friends and a nice way to spend the day, which was very hot but had a cooling breeze. Then, after a nice group photo, it was time to go home and make this blog entry. Which you have now read. :D

I bought the original soundtrack for Superman Returns today. Wow. It's so awesome. I don't know if John Williams knew what he was creating when he composed the original Superman theme, but I love that music sooo much it's not even funny. :wub: So to here it again in theatres…

August is upon us

Look, I'm blogging! Yeah, I haven't done this in nearly two weeks. I figure that I need to, since even my dad complained (or at least "observed") that I have not blogged in a long period of time. You know what they say though: "Time is an illusion, lunchtime doubly-so."…